The week ended with yet another excellent article from Peter Greene​ in Forbes, this time on the dangers of “Tax Credit Scholarships”, one of Betsy DeVos major thrusts as Secretary of Education under Donald Trump. 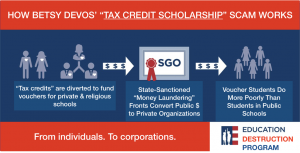 So, what are Tax Credit Scholarships? They are complicated financial mechanisms that allow businesses to divert their tax payments to fund specific private and religious schools, including those that discriminate against LGBT kids and teachers, include overtly religious instruction in their curriculums, and endorse the teaching of objectively inaccurate and incorrect information to their students.

Now, “Isn’t that a violation of the separation of church and state?”, you may ask. “Aren’t private and religious school vouchers unconstitutional?” Well, it depends on who you ask.

If you ask constitutional law experts and former Supreme Court Chief Justices, then the answer is “Yes”…

“Under our system the choice has been made that government is to be entirely excluded from the area of religious instruction. . . . The Constitution decrees that religion must be a private matter for the individual, the family, and the institutions of private choice. . . .”
–Chief Justice Warren Burger, Lemon v. Kurtzman.

But if you ask advocates of school privatization and those who stand to profit from these voucher plans, the answer is…well, probably not, but that doesn’t mean we have to stop trying to challenge that illegality in the courts…

This is how private and religious school vouchers have become the favored zombie programs of the ed reform movement–because no matter how many times you kill them in the courts, they just won’t die.

So even though “Tax Credit Scholarship” is just a sneaky way to “rebrand” private school vouchers–a Terrible, Horrible, No Good, Very Bad, Very Betsy DeVosian idea that’s pretty clearly unconstitutional and has been rejected overwhelmingly by voters in Betsy’s home state of Michigan twice, humiliating Ms. DeVos and her husband both times–voucher initiatives still keep popping up in state legislatures across the country, stumbling zombie-like through the educational landscape, devouring public school budgets even as they enrich their wealthy funders.

Sadly, Sec. DeVos and her comrades in the corporate education reform movement have been somewhat more successful in getting this “bait & switch” scheme passed in 15 other states, like Florida, Indiana, and Ohio, than they have at home in Michigan. And these vouchers have been implemented in these states in spite of pretty clear evidence that not only are they not helpful in improving student learning–they may actually have the opposite effect:

The students who use vouchers to attend private schools have fared worse academically compared to their closely matched peers attending public schools. The study finds negative effects that are greater in math than in English language arts. Such impacts also appear to persist over time, suggesting that the results are not driven simply by the setbacks that typically accompany any change of school.

Let us acknowledge that we did not expect—or, frankly, wish—to see these negative effects for voucher participants; but it’s important to report honestly on what the analysis showed and at least speculate on what may be causing these results.

It’s worth noting that the study referenced above was conducted in Ohio by The Fordham Institute, one of the most conservative, anti-teacher, anti-union, anti-public education “think tanks” in the country. As can be seen in the second paragraph above, the researchers were clearly disappointed in their findings, which do not support vouchers for their ability to improve student learning…and yet education department officials in Ohio have not reconsidered their support for these voucher programs in the state.

If it’s ok to use public tax dollars to support private and religious schools, why not allow business owners to redirect their tax payments to support things they favor rather than social services for the greater good, like public schools, police and fire departments, and public infrastructure maintenance?

What could go wrong with turning our system of public taxation into an a la carte buffet, where wealthy individuals and business owners pick and choose what to support, and what to let go unfunded?

The private and religious school voucher landscape has changed drastically over the past few decades, in ways both dramatic and troubling:

After emerging in the post-Brown years as a tool for maintaining segregation, private school vouchers gained traction when advocates sold school choice as a way to greatly improve the education of low- income students of color. The sales pitched worked, as voucher policies were adopted throughout the United States. But in two key ways, this equity-focused pathway envisioned for vouchers has led in unexpected directions.

First, research is now showing that students receiving vouchers are actually doing worse in their private schools than they would have done in their supposedly “failing” public schools. This has led voucher advocates to shift their justifications away from improved academic performance and toward a host of other purported benefits.

Second, and perhaps more importantly, the voucher landscape that has now emerged is much less targeted. After initially proposing vouchers as needed for at-risk populations, advocates have re-visited those laws and urged expansion. Low-income students of color merely provided the opening—the camel’s nose under the tent. Once the policy window opened, voucher advocates have pushed for a widened path toward general aid to private-school families. The great bulk of these private-school students are white and not poor, and a great many of them have never attended public schools. Accordingly, voucher subsidies have become little more than transfer payments for those more advantaged families. 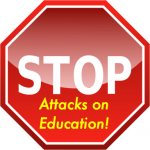 Where does this kind of thing stop?

Where does the reappropriation of public monies for private gain end?

When do our publicly elected officials stop using their offices for furthering their own interests and goals, like pushing private and religious school vouchers, instead of enthusiastically supporting the traditional public schools that educate 90+% of our nation’s children?

When do we demand that these insidious zombie voucher schemes be put to a halt permanently, and our tax dollars used to support the public institutions that support the growth and progress of our children, schools, and communities?