Yes, our political opponents are worse. But we have to be better than THIS.

In May of 2015, Sarah Studley was hired by the Michigan Senate Democrats into the position of Counsel and Senior Policy Adviser. For the first year, she loved the job and found it professionally fulfilling. A year later, however, that changed. After Andy Leavitt left as the Senate Dems Chief of Staff, John Mulcrone was hired to take his place. Eight months after that, Studley filed a Michigan Senate Discriminatory Harassment Complaint against Mulcrone, alleging that he had created a toxic environment for women in the central staff of the Senate Dems and had essentially demoted her, a result, she believed, of gender discrimination. The complaint form filed by Studley was shared with me by a source who said he was familiar with the process. You can view it HERE.

In her complaint, Studley explains how Mulcrone had a reputation for “having difficulty working with women”, particularly strong women. Studley says she was directly warned about Mulcrone’s difficulty with women from his former boss, ten months before Mulcrone took over as Chief of Staff. Once he was her boss, it soon became obvious to Studley that this reputation was well-earned and, based on conversations I have had with others who were in a position to observe, it is a reputation that is widely known.

Mulcrone wasn’t the only source of problems for the women of the Senate Democrats’ central staff. Several women from the Communications Department repeatedly shared their concerns (and in one case filed actual complaints) about the management of that department. Despite the many criticisms multiple women registered against the management of the Senate Dems comms shop, nothing was done and Mulcrone was dismissive of their feedback. Because of this, at least three women quit and took their talents elsewhere.

The Communications Director at the time, David Schupbach, was also running a side business, Point 5 Foundry, a web development company that once hosted isigned.org which ran an attack ad against Republican Senator Margaret O’Brien saying she “wants Kalamazoo to be another Charlottesville“, drawing wide criticism even from his own Party. MIRS news service reported that O’Brien had “raised three African American children as part of her blended family” and was deeply offended by the attack.

Michael Zukas, who is a partner in Point 5 Foundry and was Schupbach’s direct report on central staff for a time, is described in Studley’s complaint as someone with a history of making sexist remarks and treating women on the central staff poorly. His name came up repeatedly in this regard in my conversations with others, as well. Despite being alerted to Zukas’ offensive, sexist behavior, Mulcrone once again did little and told his staff that they should just let “interpersonal problems” go, even after a formal complaint was filed. Even then, Zukas was only reprimanded for making racially insensitive comments, not for his well-known and offensive sexism. He was subsequently promoted and given a raise.

In Sarah Studley’s case, John Mulcrone seemed to harbor particular animus. She describes in detail how she was slowly given an effective demotion, a rather surprising turn of events given that she had been promised a promotion and raise by Mulcrone’s predecessor, Andy Leavitt, and Senate Democratic Leader, Jim Ananich. Studley was systematically excluded from communications, policy development, and message development. Although she never got the promotion she had been promised, Studley’s status as Democratic Counsel for Senate and Executive branch function was stripped from her without consultation or acknowledgment. Instead, Mulcrone claimed the title of Counsel for himself, in addition to being Chief of Staff.

According to Studley’s complaint, Mulcrone:

It’s important to remember that as all of this was happening to her, Studley retained the title “Counsel and Senior Policy Adviser.” These aren’t the complaints of someone whose job has evolved in a natural way. They are the complaints of a “Senior Policy Adviser” who has been stripped of her former role as a top adviser to the Senate Democrats without notice or consultation.

After Studley filed her complaint with the Senate Business Office, an outside attorney conducted an investigation described to me as “an exercise in box checking”. At least two of the witnesses listed on the complaint weren’t contacted until a day or two before the weeks-long investigation was closed. One of these interviews was conducted while the investigator was driving.

Finally, after coming to the realization that nothing was going to change, Sarah Studley quit her position with the Senate Democrats in mid-2017. John Mulcrone, however, is still Chief of Staff and Dave Schupbach is still employed by the Senate Dems, as well. 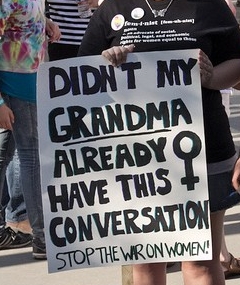 I have been reluctant to write this piece, I will confess. I don’t like slagging on Democrats. We take enough abuse from our political opponents and we all know how women and women’s issues are commonly treated by Republicans. The phrase “War on Women” didn’t come about by accident.

But, being “not quite as bad” when it comes to gender discrimination isn’t enough for Democrats, not ever, but especially not now. At a time when women are making inroads on taking their rightful and important place next to men in the political sphere and when women are waking up to their political power, in general, the thought that the offices of our Democratic staff are toxic to women and causing them to leave in large numbers should serve as a wake-up call that things need to change. When I reached out to Sarah for a comment, she expressed a similar thought. “Although I am unable to comment on the substance of the complaint,” she said, “I do find the turnover among the women on the Senate Democrats’ central staff noteworthy.”

Democrats haven’t had a majority in the Michigan state senate in nearly three four decades and for much of that time Republicans have had a super-majority. Yes, gerrymandering has played a significant role in this. But if we are losing talented female staff due to unacceptable and sexist treatment by male managers who have “difficulty working with women”, we don’t stand a chance of ever getting our majority back. At this moment in time, women are the most powerful force in politics. In 2018, more than half of the candidates who won their Congressional and state legislative primaries in Michigan were women. Women showed up on election day in massive numbers and women are, quite frankly, leading the resistance. The idea that, in this environment, our Senate leadership and management is driving away skilled and passionate women while having a different set of expectations for men should outrage ALL of us.

It’s time for a reckoning on this and I sincerely hope that this reckoning happens sooner than later. If it doesn’t, we can plan on another 35 years of Republican control of the Michigan Senate. Because the people currently crafting the messages the public sees don’t seem to have the values or the perspective that they need to win with a demographic that represents over half of the electorate.

I received no response to an email I sent to Senate Democratic leadership with questions about this situation.

UPDATE: In what can only be described as an unfortunate decision, the Senate Dems today sent out this fundraising email highlighting another way women are treated unfairly. (I’m told women in the Michigan senate central staff are paid less than their male counterparts, as well.) 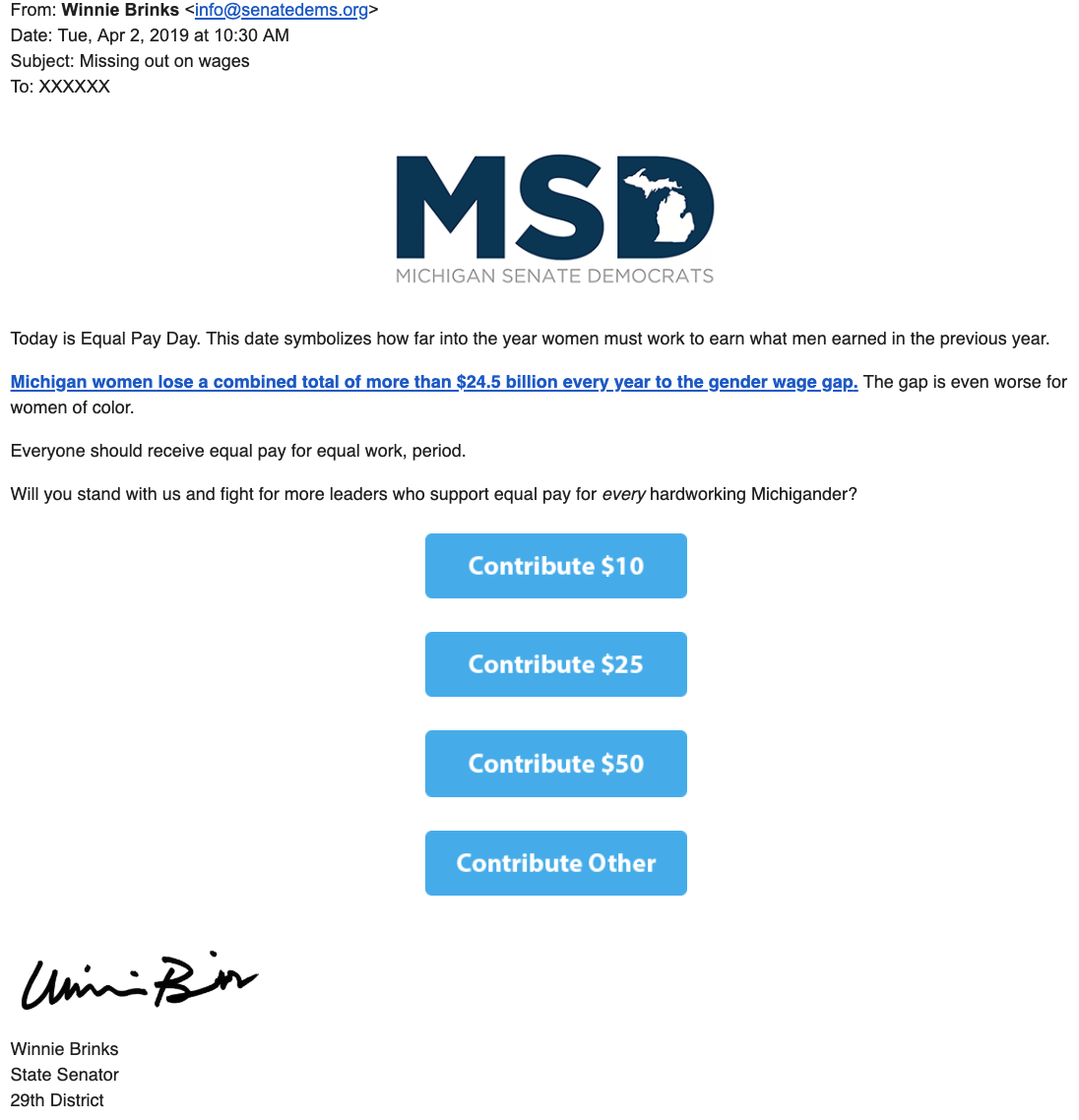 The timing on the email was exquisitely poor, coming three and half hours after I posted this piece. As one person I talked to about this put it, “This is what happens when you lack women in decision-making positions.”