Polls and shame aren’t enough. You have to make the case that Medicare for All is better than employer insurance.

Most Americans are happy with their current insurance, but they may have no idea what it is costing them

Let me start with some truisms. America cannot go on being the only rich country on earth that lets tens of millions of its citizens go without insurance or enough health insurance. We cannot go on spending more on health care than any other nation by a mile while receiving far worse results.

From almost any angle, a snapshot of American’s health care system is vile:

Now, I’m going to get controversial.

I agree with Bernie Sanders that “#MedicareForAll is a moral and economic necessity.” But I see two huge flaws in how this necessary transformation of our health care system is being sold.

Shaming people as soulless defenders of private insurers, even when they are people with disabilities whose life is at stake whenever there is any change to how medical care is provide, does little win over new converts. I share your antipathy toward insurers, as do millions of Americans who have personally confronted a bureaucracy more concerned with dollars than lives. But the uninsured, the sick, and those of us who have been abused by the industry don’t need to be won over. The tens of millions of Americans with employer-provided insurance do.

Medicare for All polls well, 56% of Americans at least somewhat favored it in a January Kaiser Foundation poll. And any crowd of progressives erupts in joy at the mere mention of these three words.

But you know what polls even better than Medicare for All? The insurance people have now.

“At least three in four Americans have consistently rated the quality of their healthcare positively, ranging from 76% to 83%, over the past 18 years,” Gallup reported in December of last year. “Smaller majorities have described their coverage as excellent or good since 2001, ranging from 63% to 72%.”

Know what polls about as well as people’s current health insurance, according to a recent Kaiser Foundation poll? Various plans that allow people buy into Medicare. 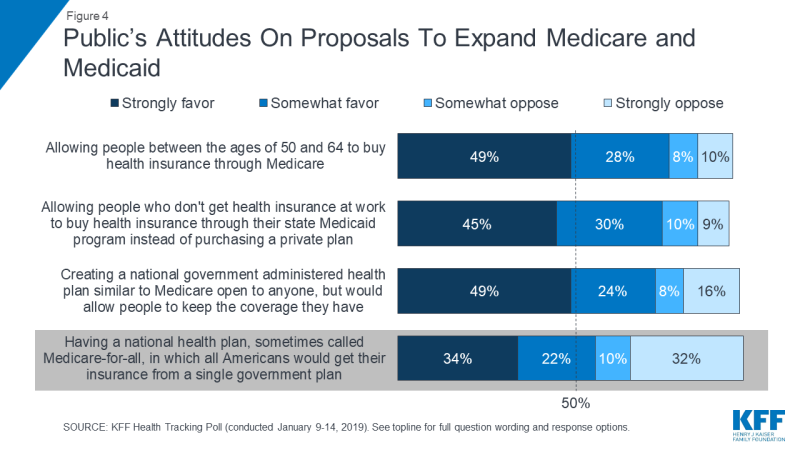 Donald Trump says he wants to make 2020 about health care. His plan will be some version of every GOP health care plan which have almost all cut $1.5 trillion from Medicare and Medicaid while uninsuring nearly 20 million and allowing insurers to price people with pre-exisiting conditions out of the market. Basically, this is the “before Obamacare but worse” plan.

The basic Democratic premise that won the 2018 elections was keep the ACA and improve it. Adding the ability for some or all Americans to buy into Medicare is a vast improvement over the current system. The Medicare for America proposal, for instance, would be a massive improvement to the current system. It goes beyond a “public option,” which only would be available for Americans who buy insurance in the state marketplaces, to offer Medicare to anyone, including employers. Enacting this massive reform would be a historic victory given the hundreds of millions private insurers will spend to stop it.

Insurers will be spending even more to take a strong Medicare for All proposal, which would make private insurance all but irrelevant, off the table. This is why the argument for a true remaking of our health care system has to be the best political campaign of our lifetime.

It has to sell people on giving up something most people are quite happy with — employer insurance. Fortunately, this argument should not be tough if we focus on the security, dignity and freedom Medicare for All provides — all of which are the exact opposite of what employer-provided insurance offers.

The premiums we pay have to be uncovered and revealed for the wage-consuming tax they are.

“Employer-sponsored insurance premiums have jumped dramatically in the last 20 years, from almost $6,000 in 1999 to more than $18,000 in 2016,” Marketwatch reported. That means our premiums have tripled while our wages have remained stagnant. 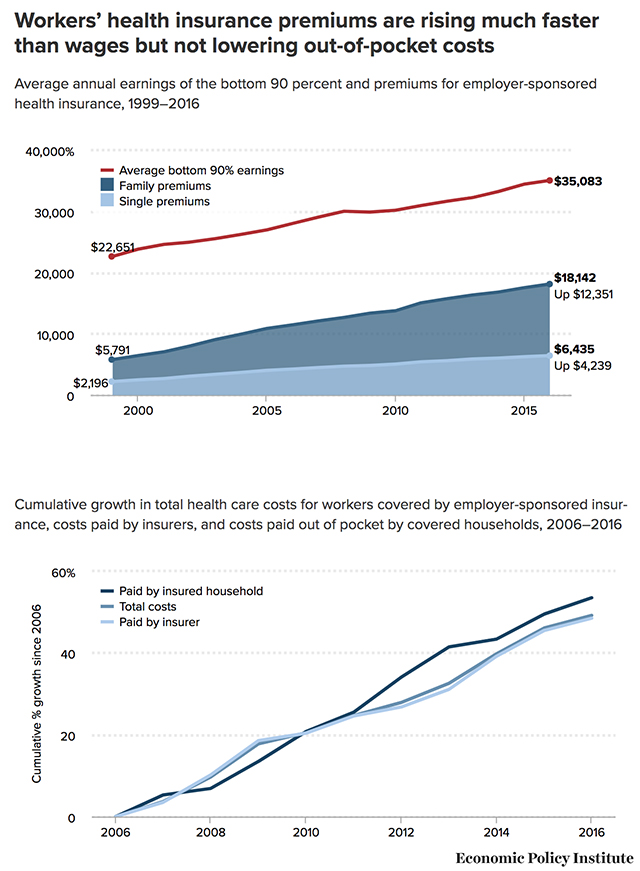 You haven’t got a raise in decades because your raises went to your health insurer. Meanwhile, there’s a pretty good chance you won’t even have the plan you’re overpaying for next year.

Beyond surviving Trump’s criminal authoritarianism, health care is the issue of our time.

If the Democratic Party doesn’t find a way to remove the holes, failings, and cruelties of our health care system — which were diminished but in no way removed by the Affordable Care Act — it will not survive.

The rising costs of insurance which undermine any hope of economic stability understated cause of the continual decline of American life expectancy. This dire situation makes it easy to relate with those who are disgusted by anyone who is willing to settle for less than Medicare for All right now. But disgust and poll numbers aren’t enough. We need to prove that people will be better off without their employer-provided insurance.

And any argument about the future of our health care system must prioritize the concerns of Americans with disabilities and pre-exisiting conditions who have the most to lose if the changes do not go well.