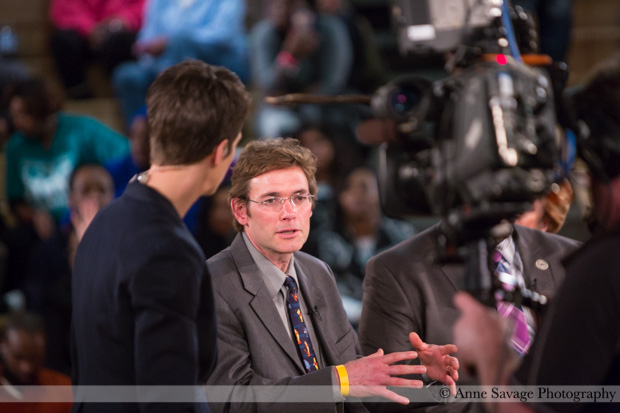 It was, perhaps, one of the most unexpected stories to spring out the tragedy of the Flint Water Crisis. Virginia Tech professor Marc Edwards, once hailed as one of the true heroes of the story, began to lose credibility with local activists like Melissa Mays. In their estimation, Edwards began to presume he spoke for the citizens of Flint and the state of Michigan at the national level, all but declared the crisis to be over even as Flint residents continued to experience rashes and other water-related issues, and even blamed an outbreak of shigella on Flint residents’ poor bathing habits.

Edwards also filed a bizarre complaint against Wayne State University researcher Shawn McElmurry, claiming McElmurry was misrepresenting himself in his research on the dramatic increase of cases of Legionnaires’ disease during the crisis and had “appropriated ideas that were not his”. This was seen by many as Edwards attacking a rival for grant funds related to the catastrophe in Flint.

Edwards’ loss of support from the activists fighting for justice in the beleaguered city culminated in an open letter sent on May 10th, 2018, addressed to “the Scientific and Engineering Communities”. Mays and the 60 signers of the letter sent it to as many groups as they could think of including administrators at Virginia Tech. In the letter, after laying out four specific complaints, they conclude with this:

Ultimately, Mr. Edwards’ focus, and the focus of any specialist claiming to “save” us, should be on our LIVES, our first-hand EXPERIENCES, our NEEDS, and on the fact that we are still suffering. Instead, Mr. Edwards goes around the country giving talks that dismiss our concerns and calls us “tribal” (https://www.swarthmore.edu/news-events/listen-engineer-marc-edwards-truth-seeking-age-tribalism, https://nicholas.duke.edu/about/events/truth-seeking-age-tribalism-lessons-flint-water-crisis-marc-edwards). Shockingly, Mr. Edwards has gone as far as to declare that the Flint Water Crisis was over 2 years ago (in 2016). We believe it would be best that Mr. Edwards now leaves our town alone. We need an end to his disruptive presence so that we can finally clean up the mess he has left behind him, focus on healing the rifts he has created between residents, and try to address the real problems plaguing us. Mr. Edwards’ choice to initiate drama distracts from the real suffering in Flint and needs to stop NOW.

We are reaching out to you, key representatives of the scientific and engineering communities who keep awarding and rewarding Mr. Edwards for his behavior, because we need full protection from Mr. Edwards immediately. We also need an immediate investigation that puts OUR voices at the center and demands evidence for all claims made by Mr. Edwards. We ask for a committee that includes academics, professionals, and Environmental Justice leaders who have expertise in abuses of professional power against poisoned communities like Flint.

Edwards responded first by using his blog FlintWaterStudy.org to refute the letter. The blog, which started out as a way to keep people apprised of the work he and his team were doing in Flint, began to devolve into rather erratic and defensive posts.

Then Edwards filed a lawsuit seeking $3 million in damages for defamation from Mays and others.

This past week, Edwards’ suit was shot down by Michael F. Urbanski, Chief Judge for the Western District of Virginia. Judge Urbanski issued a 115-page opinion which is a pretty astonishing rebuke of Edwards and his accusations. The opinion spells out out how Edwards contradicted himself and, more importantly, took some hyperbolic language from the open letter and spun it out into what he essentially characterizes a career-ending smear on himself.

The attorney for the Flint activists being sued by Edwards, Bill Moran, issued a press release saying:

“Judges don’t write 115-page opinions dismissing a lawsuit if they think that what the Plaintiff (Dr. Edwards) was doing is okay — the opinion, which I encourage everybody to read, was appropriately scathing of Dr. Edwards, a person in a position of great authority and power punching down.”

In another blow to Edwards’ credibility, this week the Michigan Department of Licensing and Regulatory Affairs (LARA) shut down its investigation into his complaint against Shawn McElmurry, the researcher who he seemed to view as a rival for grant funding:

The state has shut down an investigation into the professor who lead research into outbreaks of Legionnaires’ disease during the Flint water crisis.

The investigation of a complaint against the professional engineering license of Wayne State University researcher Shawn McElmurry was closed Feb. 20, according to a spokesman for the Michigan Department of Licensing and Regulatory Affairs.

“LARA’s investigation into Shawn McElmurry could not substantiate a violation of the Occupational Code,” spokesman Pardeep Toor said in an email to MLive-The Flint Journal.

In a statement issued to The Flint Journal, McElmurry said he was “gratified that after a thorough review and investigation, LARA closed the complaints against my license without action.”

“Their review found that I acted within the standards of practice and professional conduct for professional engineers,” the statement says. “It is critical that the public trust our work, so it is unfortunate that inaccuracies continue to be propagated about my work and the work of my team. Unsubstantiated accusations against researchers or members of the community do not help advance scientific understanding.”

I was among those who originally hailed Marc Edwards and the important work he did in Flint to reveal the sweeping scope of the poisoning of the city by the Emergency Managers who were appointed by former Republican governor Rick Snyder. However, as I watched his blog and saw it degrade into defensive attacks on others who he felt were challenging him, the luster wore off. One of the warning signs, for me at least, was when Edwards teamed up with none other than the Koch brothers-funded Mackinac Center in his failed complaint against Shawn McElmurry. More and more he began to look like someone who let his fame get the better of him and led him to believe he was infallible and the only one with all of the (correct) answers. His demeaning of the Flint activists who were, in fact, the true heroes of the Flint Water Crisis by bringing the issue to the national stage and who were instrumental in drawing attention to what had transpired was breathtaking. And his reflexive response to lash out at anyone who disagreed with him in writing, in speeches, and with this ill-advised lawsuit made it clear to me that his advocacy was more self-serving than service. It’s not a change of mind I ever dreamed I would come to or that I accepted easily. But his own actions are the sole reason for it.

Despite the lack of news and attention on what is happening in Flint, the crisis is far from over. The corrosive water that ate away at the protective layer inside lead water service lines in Flint also ate away at the plumbing and appliances of anyone connected to the water system. This week, on World Water Day, members of the group Color of Change presented 15,000 petitions to Flint Mayor Karen Weaver with three demands:

1. Amend the programs that are currently in place so that everyone who lived in Flint during April 2014-December 2016 can receive free water tanks, no matter their current status.

2. Designate a contractor pool, made up of majority Black-owned businesses, or fund to allow homeowner replace interior plumbing that was corroded during the crisis. All families affected will be identified using shared data from services line replacement program, FAST START program.

3. Produce a satisfactory report showing healthy water levels in all affected Flint homes tested once all homes plumbing and water tanks have been replaced.

Helping Flint residents restore their personal infrastructure is one of the final pieces necessary for making the city and those who live there whole again. Given its role in creating the Flint Water Crisis to begin with, it seems to me the state government of Michigan itself needs to play a significant role in making sure this happens. It’s yet another mess created by Rick Snyder and his Republican colleagues in the legislature who created the new and anti-democratic Emergency Manager Law as one of their first acts when they swept into office in 2010, a mess the current administration run by Democratic governor Gretchen Whitmer and Attorney General Dana Nessel are left to clean up.