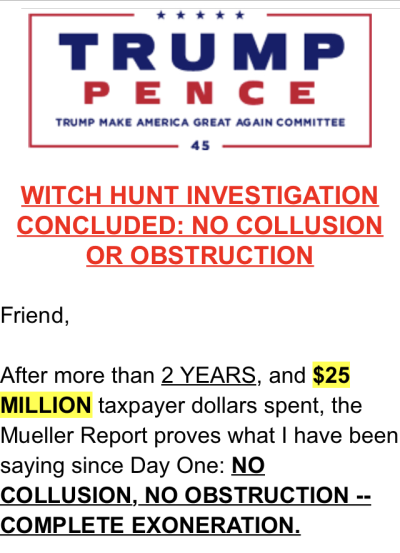 Now that Trump feels he’s been “COMPLETELY EXONERATED!!!”, his campaign has lost no time in trying to discredit his detractors by trying to get them blackballed from television. In a memorandum to “Television Producers”, his director of Communications, Tim Murtaugh, suggests that Robert Mueller has “decided” that Trump was not guilty of obstruction of justice and that he has exonerated the president.

This is despite the fact that (a) none of us has actually seen the Mueller report and (b) Mueller explicitly did NOT weigh in on whether or not Trump obstructed justice, and (c) according to Trump’s own Attorney General, Mueller’s report explicitly says that his investigation “does not exonerate him.”

But the memo goes much further than that. It lists six specific individuals who they want to see blackballed: Sen. Richard Bluementhal, Representatives Adam Schiff, Jerry Nadler, Eric Swalwell, DNC Chair Tom Perez, and former CIA Director John Brennan. He describes these men as having make “outlandish” and “false” claims about Trump’s criminality.

He then goes on to give the “Television Producers” some advice:

Moving forward, we ask that you employ basic journalistic standards when booking such guests to appear anywhere in your universe of productions. You should begin by asking the basic question:

“Does this guest warrant further appearances in our programming, given the outrageous and unsupported claims made in the past?”

At a minimum, if these guests do reappear, you should replay the prior statements and challenge them to provide evidence which prompted them to make the wild claims in the first place.

You can read the entire memo HERE.

I feel certain that the “Television Producers” won’t dignify this memo with a response or by taking their direction from Trump’s communications shill.

More to the point, however, attempting to tell them what to do in order to shut down any opposition from the president smacks of tin pot dictator tactics at best and fascist dictator media crack downs at worst.

The truth is that Trump has NOT been exonerated of obstruction of justice, many of the major players in his 2016 campaign are now in prison, and Trump himself has been obstructing justice in this matter publicly for two long years. It isn’t necessary for these six men to “provide evidence” of any kind because all of the evidence is public. Attempting to silence his critics in this heavy-handed fashion is itself appalling and outrageous. Though it comes from Trump’s campaign and not the White House, it’s all but impossible to extricate the two from each other. This memo looks very much like a threat from the president himself.

It’s now up to our media companies to gird their loins for the epic battle ahead. Trump has been threatening them since he began his candidacy and, now that he’s in the ultimate power seat and emboldened by Barr’s letter, it’s only going to get worse. It’s not hard to predict that someone in the media or one of their guests is going to get hurt or killed by an overzealous Trumpeter who thinks he’s doing the president’s bidding.

Perhaps the only surprising thing is that it hasn’t happened already.