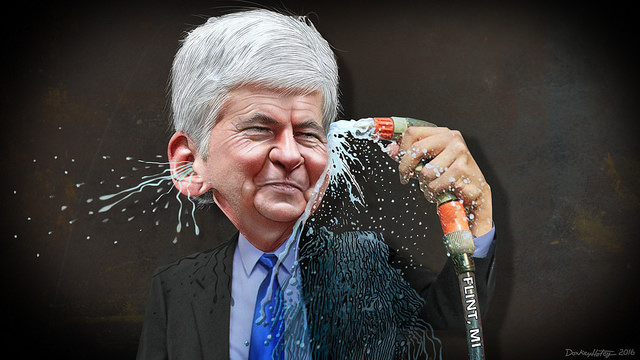 Frontline points out there is still no one in jail for the Flint Water Crisis. Meanwhile, Rick Snyder walks free.

Snyder is free to plot his “next act” — which is what rich people do while 4.8 million federal employees plot their next meal — and travel the world and possibly even teach at some college with vanishingly low standards. He’s privileged to have all the time and money he needs to spend the rest of his life as he pleases.

The poisoned don’t have the same luxury as the poisoner.

The people of Flint will spend the rest of their lives, even after all the pipes are fixed, trying to regain what taken from them in the pursuit of saving a crumb of the dollars Rick Snyder flooded out in corporate tax breaks. When kids living in Flint today are grandparents, they will still be dealing with the costs of this atrocity to their health, their community and their property.

“I’m sorry, and I will fix it,” Rick Snyder said in January 2016. And even this concession showed the hubris that made this crisis possible.

Pipe installation may be ahead of schedule now and a fifteen people have been charged, but there has never been a serious attempt to “fix” this crisis. We had to wait until we had new Democratic Attorney General before the state even began to take the civil suits from the people of Flint seriously. And we still owe the residents something like a Marshall Plan to restore some of the damage we did through an elected official who undermined local control to assert his disregard for the lives of the people of Flint.

But what can’t happen is for Rick Snyder to spend the rest of his life unburdened by the shame he has earned.

The multi-millionaire showed no true remorse. His response to the crisis was passable and evasive at best. And after the crisis broke, he veered further toward the “pollute government like a business” ethic that gave him the unearned confidence to go forward with the Emergency Management regime that made the Flint Water Crisis possible.

He gutted Medicaid expansion, his only true accomplishment in office, turning it into a tool to punish seasonal workers and caregivers. He stole sick leave from a million Michiganders and slashed a historic minimum wage increase, leaving tipped workers at the mercy of potential harassers — knowing that voters would have approved both ballot measures easily.

Allowing Snyder to win back his elite cred with by funding a startup lab and dabbling in charity would be a moral failure on par with the resurrection of the credibility of another failed MBA-turned-politician — George W. Bush. Bush has his genial nature, Dick Cheney’s culpability and an elite intolerance to accountability for the powerful to thank for his return to the public’s good graces.

Snyder only has the former.

When it comes to damage done by an elected public servant, hopefully no future American president will match W., despite Donald Trump’s best efforts. And no governor should hope to be mentioned in the same breath as Rick Snyder.

If he is not counted as a scoundrel for the rest of his life, if he can wander into public without any fear of shame and non-violent protest, we will not only have failed. We will have invited even greater disasters, knowing those too will go unpunished by those rich enough to plot their next acts.