The government should be open right now. A million government workers, mostly veterans, shouldn’t be without a paycheck. Contractors at the Smithsonian and national parks shouldn’t be at risk of losing their homes. Scientific research shouldn’t be grinding to a halt.

This is not just my excellent opinion. It’s a fact.

On the Wednesday before Christmas, the U.S. Senate voted unanimously — that’s 100-to-0 — to keep the government open. The Paul Ryan-led GOP House then refused to vote on this bill because they knew it would pass, as it did in the Senate, with a massive, veto-proof majority.

They did this because Donald Trump told Republican Senators he’d sign their continuing resolution. Then the fourth branch of government, Fox & Its Even More Racist Friends, weighed in and decided that the president was not being racist enough. He needed a wall. And since the wall offers no practical value whatsoever as anything other than a “metaphor” of cruelty, Republicans would offer nothing in return.

Right now, the public blames Trump for this shutdown, which most people aren’t that focused on yet because they have family, food and alcohol to devour. While 47 percent correctly say this is all the president’s fault in a new Reuters/Ipsos poll, 1/3 of Americans blame congressional Democrats.

Only 7 percent only blame the people who actually made the shutdown happen — congressional Republicans.

This is good position for Democrats, with a clear majority blaming Trump and his GOP. But thinking ahead to 2020, now is the time to tie vulnerable Republicans in the Senate to this mess — especially if they refuse to back the package of bills House Democrats now plan to send to them, which includes a continuing resolution like the one they already supported along with 6 the Senate’s spending bills.

“It’s simple: The Senate is not going to send something to the president that he won’t sign,” Mitch McConnell’s spokesman told Politico.

This is going to be an impossible position to defend. And guess who already knows this? The most vulnerable Republican in the Senate: 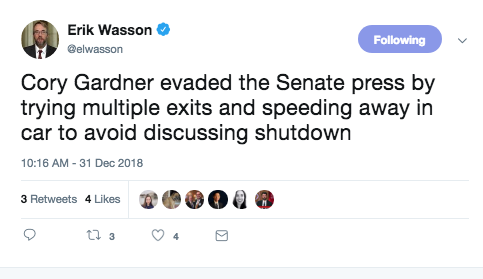 Gardner is the only Republican who is defending a seat in state Hillary Clinton won. The 2016 Democratic nominee also won all but one electoral vote in Maine, where Susan Collins would have to win, if she wants to keep selling out everything she pretends to believe in for another six years.

But that doesn’t make these the only vulnerable GOP Senate seats up in 2020 if you add in states Obama won twice and have trended away from Republicans in 2018.

Martha McSally will have to defend a seat in Arizona a state she’s already lost once. Thom Tillis won his seat in North Carolina in 2014, a GOP wave year, by less than 2 percent. Pat Roberts represents Kansas, which went blue in November, and David Perdue in Georgia has to run in a state trending blue, possibly against Stacey Adams, who got almost 600,000 more votes in 2018 as she ran for governor than Perdue got when he was elected in 2014.

When it comes to wretched hives of scum and villainy, only the Mitch McConnell-controlled Senate can compete with Maralago. Wresting it from his hands is as important as ejecting Trump from power.

Trump already owns this unnecessary shutdown, but if he gives up, it will only hurt him with the 4 of 10 Americans who still buy into his Four Years Hate. If this is going to end without extending on forever, it will be because Mitch McConnell recognizes that this could hurt his chances of controlling the Senate and decimating our courts after 2020.

BTW: Progressives Everywhere is already raising money for the Democratic candidates who will take back the U.S. Senate.