The following post was written by Beatrice M. Friedlander, JD, president of Attorneys for Animals.

Most Michiganders, like most Americans, agree that it is unacceptable to raise dogs and puppies in cruel conditions. Yet many puppies offered for sale in this state come from “puppy mills.”

Take action now to prevent a proposal that would give cover to pet stores and their suppliers. Call your state senator today and ask her/him to oppose House Bills 5916 and 5917 if they come up for a vote. (Find your senator HERE.) 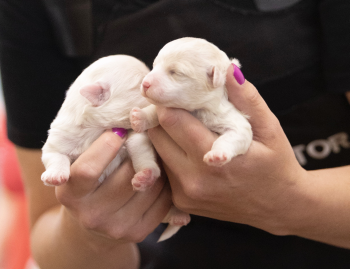 In puppy mills, breeding dogs, who often spend their whole lives in small wire cages, are treated as nothing more than reproduction machines. When they can no longer produce puppies, they are discarded like trash. Puppies are merely products and their health and well-being are of little concern.

Yet some members of our state legislature are working to protect puppy mills by ensuring they can continue to sell puppies to Michigan pet stores. House Bills 5916 and 5917 narrowly passed the Michigan House of Representatives last Thursday. Now, it’s up to our Michigan senators to stop these dangerous, ill-advised and cynical bills.

The primary backer of these bills is the Ohio-based corporation, Petland. Over 280 localities across the country have passed laws to prohibit the sale of puppies in pet stores, in order to protect animals and consumers. In response, Petland is going state-to-state, asking lawmakers to shield the corporation from local regulation. In the past two years, they’ve been unsuccessful in Florida, Georgia, Tennessee, and Illinois.

The basic scheme is as follows: one bill seemingly sets up regulation of pet stores, currently not regulated by the state. But in exchange, local governments are banned under the other bill, from passing new laws or enforcing existing ones regulating pet stores.

The proposed regulations are essentially meaningless and unenforceable. They purport to regulate the sources of animals (puppies) from which pet stores purchase their “inventory.” These regulations are meaningless because they offer pet stores a choice of sourcing from completely unregulated breeders, regardless of the health and welfare of the dogs in their care, or from a USDA-licensed breeder, so long as the breeder hasn’t received certain violations.

Unfortunately, “USDA-licensed breeder” gives a false sense of security to the puppy purchaser. It says nothing about the quality of the breeder. It means only that the breeder is large enough to require such a license and sells dogs wholesale. USDA-licensed breeders can legally keep dogs in stacked, wire cages only six inches larger than themselves for their entire lives and can breed dogs at every heat cycle. As if that is not bad enough, the USDA does a very poor job of enforcement.

And the regulations are unenforceable because the standards set forth in the bill rely on USDA inspection records. However, these records were deleted from public view in early 2017 and therefore are unavailable to the person who has fallen in love with a cute puppy at a pet store but wants to check the source of that puppy and the history of the facility where the puppy was born.

The bills stalled for months and eventually were amended so the versions that passed the House say local governments cannot “arbitrarily” ban pet stores. This is still objectionable. Make no mistake: the goal is to stop local regulation of pet stores, and the chilling effect of these confusing bills might just do that. And it’s clear that any local ban that does pass will be challenged as “arbitrary,” thus setting up lengthy and expensive litigation.

It is crucial that local governments retain the unequivocal right to regulate pet stores. Pet stores puppies are often sick, leaving consumers with thousands of dollars in veterinary bills. Sometimes the puppy dies, causing much heartbreak. Pet store puppies are also likely to have behavior problems because they were taken from their mothers too early and socialization is all but impossible in a pet store cage.

In fact, a lawsuit was recently filed against Petland Novi by a man who alleges he bought a puppy there who was infected with Campylobacter bacteria, which was passed to him and resulted in his hospitalization. This claim is consistent with a recent report by the Centers for Disease Control stating that puppies sold through pet stores were the source of a multistate, multidrug-resistant outbreak of Campylobacter that infected at least 118 persons in at least 18 states.

The people of Michigan deserve better than these bills. Protection of puppy mills and their pet store sales outlets does not represent the compassionate people of this state. After these bills were introduced in the House in May 2018, there was a public uproar, with constituents mobilized to call their representatives to oppose the bills. We need the same grassroots effort, and we need to be proactive. Call your senator today and urge a “no” vote on HB 5916 and 5917.