Here’s the mailer they sent out for Annette Glenn: 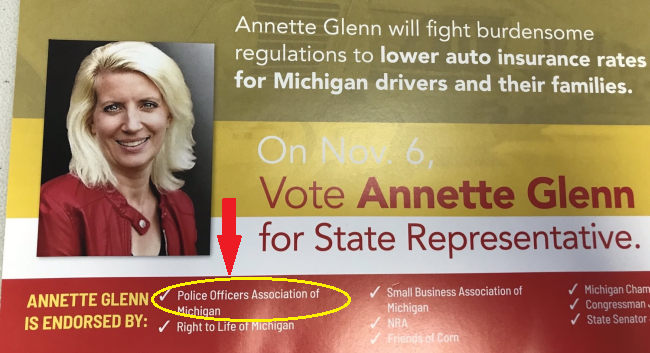 POAM released a strongly-worded statement clarifying who they have endorsed and it’s clear that the Michigan Republican Party sent out false information (aka lies) with these mailers:

MICHIGAN REPUBLICAN PARTY WRONGFULLY IDENTIFIES POAM ENDORSEMENTS
As Michigan’s largest police union, POAM has over 12,000 members. We are deliberate and selective about the candidates we endorse, which is why POAM is the most sought-after law enforcement endorsement by candidates.

It has come to our attention that the Michigan Republican Party sent mailers in 3 house districts wrongly identifying 3 candidates as earning the Police Officers Association of Michigan endorsement. This is incorrect.

Using our name improperly is offensive and an error that cannot be overlooked.
We would like to set the record straight as which candidates have earned the POAM endorsement and the trust of law enforcement in these 3 districts:

I know that, like me, you’re positively SHOCKED that Michigan Republicans are blatantly lying. If you’d like to help counteract this act of deception by the Michigan Republicans, please consider helping to get out the vote for Sarah Schulz and Jim Haadsma. You can support their campaigns with an infusion of last-minute cash HERE and HERE, respectively.