“Politicians draw voting maps that directly benefit themselves, instead of putting the interests of voters or communities of Michigan first. It’s called gerrymandering and it’s a real problem in Michigan.” That’s basis for Proposal 2, a ballot initiative from the group Voters Not Politicians that would end the process of politicians picking their voters rather than the other way around. Prop 2 creates a Citizens Redistricting Commission comprised of 4 members from each of the two largest political parties (and 5 members who are not affiliated with either major party. It takes the task of drawing of Congressional and state legislative districts out of the hands of political parties to make a more robust democracy-friendly process.

Gerrymandering isn’t just unfair, it is anathema to democracy and harmful to our country.

First let’s look at why gerrymandering is anti-democracy. By now, you’ve probably seen this image that shows two ways a fictional district could be drawn: 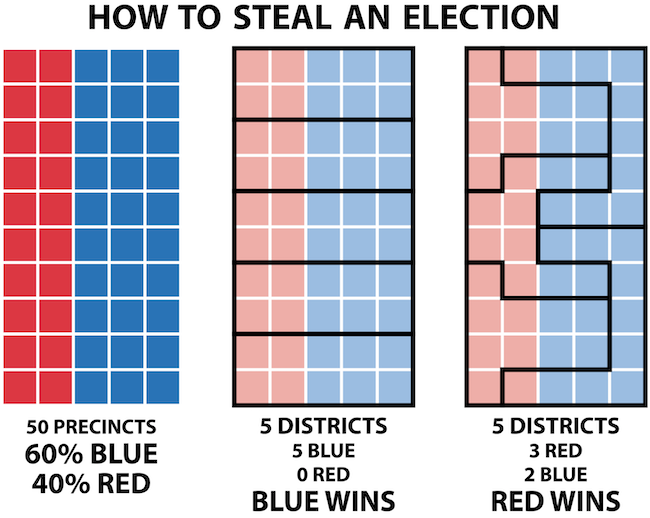 The well-and-truly gerrymandered district map on the right, not only does red win even though they have fewer voters (like in Michigan where Democrats receive more votes overall but hold fewer seats), it has an even more insidious impact. Imagine you’re a red voter in one of the blue-dominant districts. Your vote has no impact because it’s swamped by all the blue votes. But it’s not only that. The elected official representing that area has no incentive to listen to you; you have no voice. In the district map on left, red voters are still outnumbered by blue voters but they’re close enough that a compelling candidate could possibly flip one of those districts by changing a blue voter to a red voter. And the elected official now has greater incentive to listen to ALL of their constituents.

Now let’s look at the harm it does to our civil society. In a gerrymandered district, one party dominates the other so much that primary races are the only ones that really matter. Because of this, elected officials are in constant fear of being primaried by members of their own party, generally by those with more extreme beliefs. This fosters extremism no matter which Party is in power. This impact is what allowed for the rise of the Tea Party in the lead up to the 2010 election and the election of some of the most extreme conservatives into Congress and into state legislatures. Once that happened, Congress became moribund, unable to move for fear of angering this or that constituency and a subsequent primary challenge.

Proposal 2’s critics laughably claim that it will put the important task of drawing districts “into the hands of untrained and unqualified citizens”. One wonders what training or qualifications a member of the Independent Citizens Redistricting Commission would need. It’s not like a group of people would just sit around with maps and Sharpies and argue about the lines. Under Proposal 2 “the Commission will have the resources to hire expert consultants to assist with drawing maps. These consultants may include demographers, computer programmers, and legal experts.” The Commissioners would also hold public hearings across the state to allow for all citizens to have input into the process.

The other major argument of opponents to Prop 2 is that “we shouldn’t mess with the Michigan constitution”. In other words, we should be true to the intent of the authors of the original constitution and not try to modify the state constitution. This is astonishingly ironic for one simple reason: The original constitution, passed in 1963 contained a “Commission on Legislative Apportionment” and gave it the responsibility of drawing legislative districts. It was ruled unconstitutional in 1982 after the Supreme Court ruled that legislative districts contain similar numbers of residents which is why we don’t have one today. But it’s clear that the original intent was, indeed, to have an independent commission set up to drawn district lines and Prop 2 is a return to that.

It’s worth noting that the two most prominent opponents of Prop 2 are the Michigan Chamber of Commerce through their group Citizens Protecting Michigan’s Constitution and the Michigan Freedom Fund.

The Michigan Chamber of Commerce has pumped money into the campaigns of conservative state Supreme Court justices:

[T]he Michigan Chamber of Commerce is funding an anti-redistricting reform lawsuit that it hopes to take to the Michigan Supreme Court, at least four justices of which have received significant campaign contributions from the Chamber. The apparent conflict of interest is eyebrow-raising.

The Michigan Freedom Fund is backed by the corporatist DeVos family who are eager to keep Republican domination of our state in place through strategic gerrymandering.

The impact of Prop 2 on our political environment, when all districts are reasonably competitive again, would be transformative. Vote YES on Proposal 2 for a huge step in the direction of real democracy in Michigan.