By now you have likely seen or at least heard about a newly released video showing a young Bill Schuette acting totally inappropriately with a photo journalist. The video quickly went viral and has generated headlines like “Schuette tells woman in video: ‘I will do anything you want’” and “Schuette regrets ‘embarrassing’ exchange from 1989” and “‘I Think I Need a Shower’: Internet Totally Grossed Out Over This ‘Creepy’ Video of GOP Attorney General” and “Well, here’s Bill Schuette being creepy as hell to a woman in 1989“.

Here’s the video. Prepare to be squicked out.

A lot of my super smart and clever progressive friends have been having a field day with this, making gifs and memes and generally rubbing Schuette’s nose in it. However, this misses a more important point: What Bill Schuette did was sexual harassment. He made unwanted and unsolicited sexual advances toward a woman in a professional situation (a woman who is heroic in her ability to completely ignore Schuette’s disgusting commentary) and he did it as an adult. Not as a high school kid. Not as a college kid. As an adult.

Schuette released a statement, attempting to brush it off something that happened a long time ago and has been known about “for some time”:

That apparently was my poor attempt to be humorous 30 years ago. The video, which appears to be edited with only one short portion shown, has been in the public domain for some time. It’s fortunate for me that Cynthia came into my life and let me know that I am not a very funny guy, but this is no less embarrassing to me today and I regret it.

Here, too, it might be easy to overlook an important aspect of what Schuette said. To him, this was him being “funny”. He regrets it because it’s embarrassing, not because it was completely inappropriate.

We need to stop calling things like this “creepy” and start calling them what they are: sexual harassment.

Women deal with this sort of “everyday sexism“… well… every day. It has, until recently at least, becoming increasingly less obvious, at least to everyone who isn’t directly experiencing it, but it’s still pervasive and Republicans are now coming back out of the closet with their harassing ways. Here’s John James, Republican candidate for U.S. Senate, at a recent political appearance making a “joke” about “grabbing boobs” in the context of breast feeding:

Following up on the @SchuetteOnDuty video from earlier today, here’s his fellow Michigan Republican @JohnJamesMI coming with a creepy comment about “grabbing boobs” when telling a story about how he was breast fed. Wtf? #MiSen pic.twitter.com/hUJiopTZlV

This video of Bill Schuette came out one day before Schuette is set to debate his Democratic opponent, Gretchen Whitmer, who herself had something to say about it:

I imagine everyone who’s watched it had the same uncomfortable look on our faces. But even more troubling is the fact that Schuette has spent the past 33 years in office attacking the rights of women and working to take away our access to contraception and health care. https://t.co/3msr79qEIV

Who knows? Maybe it will come up during their conversation tonight. We can only hope so.

UPDATE: Schuette’s campaign shared the link to a blog post on The Michigan Conservative “proving” that this has “been in the public domain for some time”. The link is now dead but used to point to this blog post: 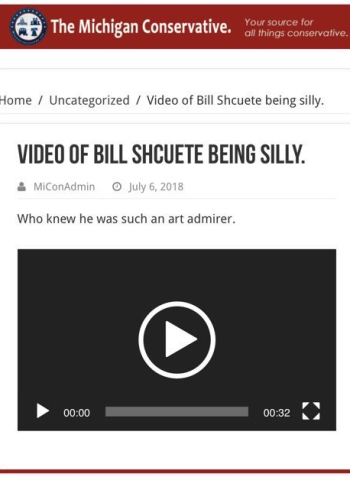 Notice the intentional mispelling of Schuette’s name to prevent it from being discovered by a Google search. Gongwer reports that the post was actually back-dated:

The video was posted to the miconservativenews.com website with a July 6 timestamp but a search of the Internet Archive, which last archived the website August 23, showed no evidence the article had been posted prior to August 23, meaning it had been backdated.

In other words, Schuette’s supporters and his campaign clumsily colluded to make it look like this is “old news”.