The following post was contributed by my good friend Frank Houston. Frank is the Michigan Regional Program Manager of the BlueGreen Alliance, a group that encompasses a variety of progressive values: labor, environmental, and political action. For this reason, it’s a group that I’m happy to share this platform with.

I was born and raised in Michigan. As a Michigander, you grow up knowing that as the auto industry grows and goes, so goes Michigan. This was never clearer to me than when I came back home to settle down in 2005 and I found this state in the midst of the worse economic downturn of my lifetime. Friends and family—people I grew up with and deeply care for—were losing their jobs, often their homes and even more often, their hope and faith in Michigan providing a viable future for themselves and their loved ones.

The good news is that after some tough years, many of those same friends and family who stayed in Michigan, are now starting to get their lives back on more stable footing. A big piece of that one way or another has been the automotive recovery; which has been aided, enhanced and strengthened by the strong fuel economy standards the U.S. Environmental Protection Agency (EPA) and the National Highway Traffic Safety Administration (NHTSA) at the direction of the Trump administration are considering rolling back today. 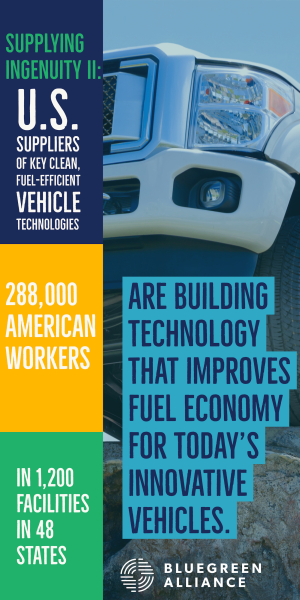 I was in Dearborn – along with automobile executives and public health advocates; auto-suppliers and academics; clean economy experts and environmental justice activists; as well as elected leaders like Congresswoman Debbie Dingell and future Congresswoman Rashida Tlaib – when the EPA and NHTSA held one of their three national hearings on their proposal to rollback fuel economy standards for cars, trucks, and SUVs for model years 2021-2026. Over 100 industry experts, automakers, parts manufacturers, and others who joined me in testifying were overwhelmingly against the proposal, compared to the handful of people who supported the Trump administration’s move to end these standards that helped put Michigan back to work. This is because in Michigan we know that sound, long-term fuel economy standards have helped bring back quality, American manufacturing and jobs that support our communities.

These standards have worked and will continue to work if the Trump administration lets them. This means we need people like you, to let them know that fuel economy standards are important to working people in Michigan.

They have ensured that any vehicle a consumer chooses to buy — whether a car, truck, or SUV—is becoming more efficient every year. As a parent with six children – who simultaneously ask me “how much are we polluting the earth” and complain about a sibling invading their personal space, no matter how big of a vehicle we are driving – I appreciate the cost savings. And with my oldest daughter Eva having asthma, I definitely feel a personal responsibility for making our world a little cleaner as well.

Michigan families like mine need a growing middle class, not policies that make things harder for our community. We need good jobs and fair wages, so we can provide for our children, save a few more dollars for college and to put more back into our community.

I told the EPA that keeping strong standards will help us leave our kids a planet they can live on, while they build up a cleaner economy for our community that they can work in. This, I believe, is the foundation for prosperity for generations of working people to come in Michigan and beyond.

But what do you believe?

It’s not too late to tell them. Write them a letter today urging them to keep the standards strong. You can do that HERE.