Like Bill Schuette, Republican Congressman Mike Bishop has no problem using your tax dollars on himself and his friends

By now it’s no secret that Republican gubernatorial candidate Bill Schuette used his office and staff for his own personal work. From working on political operations and promoting his book tour to conducting multi-million dollar real estate transactions and hiring “Republican campaign activists” as staff in his office right before the 2016 campaign began, Bill Schuette appears to view tax dollars and his government office and his state government staff members as things he can use for his own personal benefit.

Turns out that the same is true for Mike Bishop, the Republican Congressman from Michigan’s 8th District. Back in 2015, I broke the story that Bishop was using tax dollars to pay for the apartment of his Chief of Staff Allan Filip. Filip, as it turns out, used the apartment for liaisons with 53rd District Court Judge Theresa Brennan. Brennan, who was cheating on her husband with her boyfriend, was cheating on her boyfriend with Filip and “testified to visiting him at his apartment in Washington D.C.“. Again, this man was Bishop’s Chief of Staff.

This week, we have more evidence that Bishop is, even now, using government resources for his own benefit, in this case to salvage his downward spiralling re-election campaign against the formidable Democrat Elissa Slotkin.

During two recent debates, one on television and one on the radio, while Slotkin came with just a pen and a pad of paper, Bishop showed up with a giant Trapper Keeper-like binder full of talking points:

Oh look. Mike Bishop showed up for a radio debate With @ElissaSlotkin with his Trapper Keeper full of Republican talking points. You can almost see “Granholm” and “Pelosi” screaming from the pages. pic.twitter.com/IMDSEvTHrA

LOL. Mike Bishop couldn't debate Elissa Slotkin without a giant binder full of spin. I've never seen a candidate with this much written material during a debate. Have you? #mi08 pic.twitter.com/GXeAgBWZMu

At a third debate this week, this one an official televised debate, Detroit News journalist Jonathan Oosting snapped this photo of Bishop clutching his giant binder while exiting the studio:

Take a closer look at the cover of the binder: 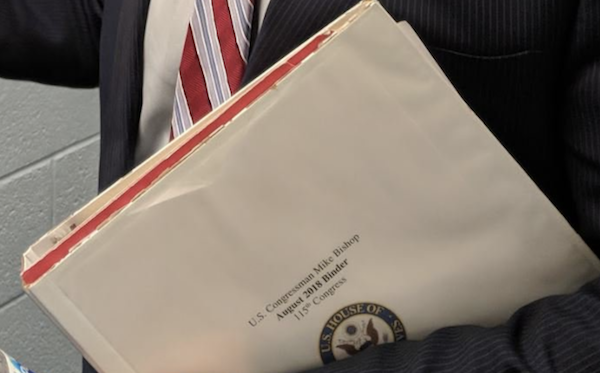 The cover says “U.S. Congressman Mike Bishop / August 2018 Binder / 115th Congress” and has the official seal of the U.S. House of Representatives suggesting that it was put together by his Congressional staff using government resources.

Both Bill Schuette and Mike Bishop are shameless about their use of taxpayer dollars to promote their own interests and those of their friends and family. It’s little wonder they are struggling in this election cycle.

You can help Elissa Slotkin send Mike Bishop back to being a pocket lint wrangler for multi-millionaire Matty Moroun by clicking HERE.