Collins: I ‘believe’ Dr. Ford but she is delusional

If you believe women are telling the truth, it’s harder to justify denying them control of their bodies 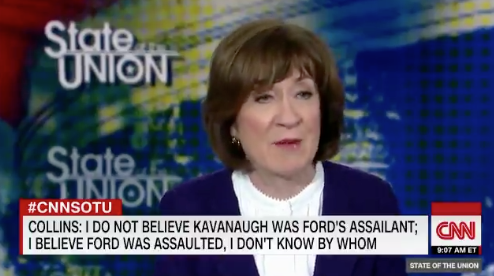 What’s the point behind saying you “believe” Dr. Christine Blasey Ford and then immediately calling her delusional — besides justifying voting for someone who has been accused of sexual assault by someone of the sort of class and stature you don’t feel comfortable simply dismissing?

Collins is nodding to many conservative tropes with this line of propaganda, which mocks  Dr. Ford sworn statement about being “100%” sure that it was Kavanaugh sexually assaulted her while laughing in her face.

First, Collins she’s putting a woman’s voice behind a “mistaken identity” conspiracy theory first floated by a GOP operative who chose to smear an innocent man over  Kavanaugh, even though this smear contradicts the best science on the kind of trauma Dr. Ford experienced.

She’s also nodding to how powerful and disruptive the #MeToo movement is to white male patriarchy. You have at least pretend to back it, even as you’re saying, “I have a better idea of who assaulted Dr. Ford than than Dr. Ford does.”

Finally, Collins is showing how useless her so-called “pro-choice’ stand is — as if that needed clarification after votes for dozens of pro-life federal judges and Brett Kavanaugh — by making the point that women, especially survivors of assault, cannot be trusted (unless it meets conservative political aims).

As many have noted, conservative opposition to abortion even in cases of rape and incest, as laid out in the GOP platform, is predicated on the belief that women inevitably lie about sex. The thought is; Women are so desperate to have abortions as birth control that they’ll lie about consensual sex being rape, so you can’t give them an out. This is not the sort of thing you say out loud, because when conservatives start talking about rape, they lose elections. But just like Kavanaugh telling Collins that Roe is “settled law” is code for “Until I’m the fifth vote against it,” this sort of misogyny is at the heart of denying a woman control of her own body.

How could it not be when studies show that criminalizing abortion doesn’t prevent abortion — it makes it more common and potentially deadly?

So let’s be clear: Collins decided to be the engineer of the train that just annihilated Dr. Ford. And now she’s turning back and spitting on the burning embers she left by feeding every terrible argument that justifies denying women their basic rights.