To take the House, Democrats still need to win the popular vote by at least 2.6 times Clinton’s 2016 margin 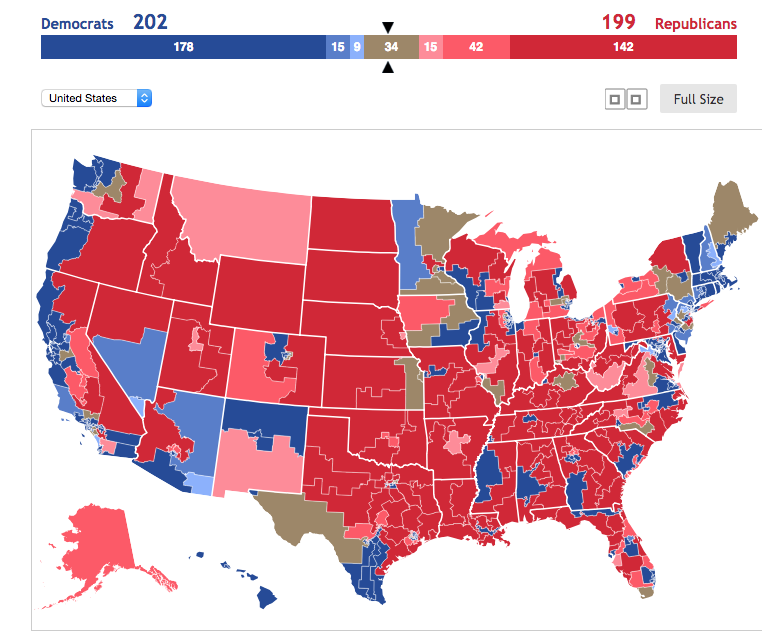 It’s almost midnight on November 6, 2018. California will still be counting ballots through December but the big result is already clear: Republican candidates won fewer votes than their Democratic opponents, but the GOP will keep control of the House of Representatives for two more years.

Donald Trump stays up tweeting until dawn. “The American people have vindicated me!” he’ll insist. “Mueller must go! Investigations into Hillary Clinton’s collusion must begin now!”

The GOP will agree. Much of the media will buy then sell the story. Losing the popular vote repeatedly yet holding unchecked power over all three branches of government is the new normal.

So how many fewer votes did GOP candidates receive?

Maybe it’s like 2012. That’s when the GOP kept its 33-seat majority in the House, though it’s candidates took in 1.5 million fewer votes. Or maybe it’s like 2016, when Trump lost the popular vote by 2.1 percent and became the biggest popular vote loser elected in 140 years. Or maybe their edge is two, three times or even five times Trump’s losing popular vote margin of 2.1 percentage points. A report from the Brennan Center for Justice released in March of 2018 projected the GOP could lose the popular vote by 10 percent—a far bigger deficit it lost by in 2006 when Democrats retook the House for the first time in twelve years—and keep the majority. Retirements and a new Congressional map in Pennsylvania have made the situation for Democrats a little better. Data scientist G. Elliott Morris’ noted on August 30th that his model finds that to take the House Democratic candidates need to win the popular vote by a mere 5.5 to 6 percentage points to have a chance to take the majority — or at least 4.6 times of their margin in 2012, which would be their largest popular vote victory since the massive wave election of 2008.

But we shouldn’t have needed any stinking reports or models to hear the alarms blaring.

In November of 2017, the first regular swing state election of the Trump era took place in Virginia. Republicans showed up, as usual. Trump’s party delivered the strong off-year election turnout conservatives have come to expect. But Democrats rolled to the ballot box in a blue wave, smashing pollsters’ projections and shocking the cynics, who argued that Donna Brazille’s book and an internet ad about a racist truck would somehow save the GOP. Ralph Northam was elected governor by the largest margin any Democrat had won by in 32 years while his party gained 15 seats in the House of Delegates.

Yet somehow, amidst this flurry of good news for the left, a crucial data point got barely any attention: Democratic candidates won the popular vote by 9.4 percent but that was not enough win control of Virginia’s House due to unbridled gerrymandering. They were denied the majority by one seat, the 94th District around Newport News. A recount found the Democratic and Republican nominee exactly tied. A judicial panel decided that the election should be decided by a drawing. Democrats, who took in more than 53 percent of all votes cast, were denied control of the state house by a goddamned raffle.

This abomination grabbed some headlines. But few pointed out that the electoral maps were so fixed that Democrats to have clinched control the Virginia’s lower state house they’d have had to win the popular vote by 9.5 percent—essentially 10 percent.

Even fewer noticed six months later when a Washington Post report about the 94th District found that “more than two dozen voters — enough to swing the outcome of that race — cast ballots in the wrong district, because of errors by local elections officials.” Those voters just happened to live in “a predominantly African American precinct that heavily favored Democrats in the fall.”

Who could have ever guessed—besides anyone who’s been paying any attention?

The chances that Democrats win the popular vote and don’t take the House are about 25 percent, about Trump’s chances of winning in 2016. And as G. Elliott also noted:

Events which you wouldn’t round a 25% probability down to 0:

What should you do? You could pick a candidate in a toss-up district and do everything you can.