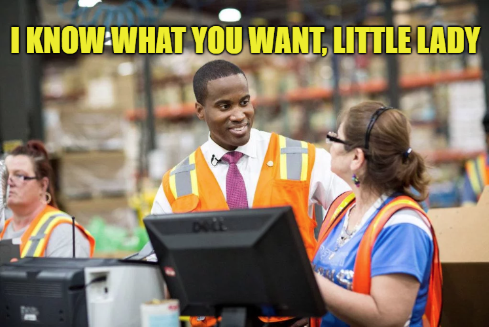 Republican John James is “running” to unseat U.S. Senator Debbie Stabenow. I use quotes around “running” because he’s down double digits in virtually every recent poll, 22.5 points in the most recent one.

One reason James is doing so poorly is that he is completely out of touch with over half the electorate: women.

At a recent men-only event in Bath, Michigan in May, James explained to the men there what women want in politics and leadership: Men.

We have an obligation to future generations to make sure that we are operating within the role that we have to lead. And yes that is not politically correct, but men, we have a charge to lead and we are failing in that because we are afraid to hurt someone’s feelings.

The fact of the matter is women want men who have been tested. And boys need to be tested. And we are those examples. And so this falls silently on our shoulders to ensure that we are the Christian business leaders and the men that we must have in order to make sure that subsequent generations have the blessings that we have today.

I’m sure all you little ladies are nodding your heads thinking, “This man has finally explained to me what I want.”

Clearly, that’s not actually the case given James’ abysmal poll numbers. But he fits right in with the Daddy Savior style of politics personified most blatantly by Donald Trump, a “man” John James says he stands behind “2000 percent”.

Yeah, good luck with that, Mr. James. See you on November 6th when a woman hands you your ass.

In a comment on Facebook, a childhood acquaintance of James whose mother worked with his father told me, “Let me tell you, this shit makes me laugh. Why? Because when his mother put him in his place, he listened to her, a woman. When he was learning about the business, he listened to my mother, a woman.”

She also said his parents have both supported Debbie Stabenow for years.

It goes without saying that this sort of blatant paternalistic sexism is not only disgusting but also politically suicidal. There is no question whatsoever that this political cycle is rightly being dominated by strong women candidates. I think Angela Vasquez-Giroux Wittrock (@AyeVeeGee) puts it best:

Ahem, @JohnJamesMI: women don’t want men who’ve been TESTED, we want men who LISTEN. That’s the reason so many of you are failing in your attempts to lead: because you’re not representing us. At. All. And we know this. And we vote. https://t.co/2Y5qdjg3yn