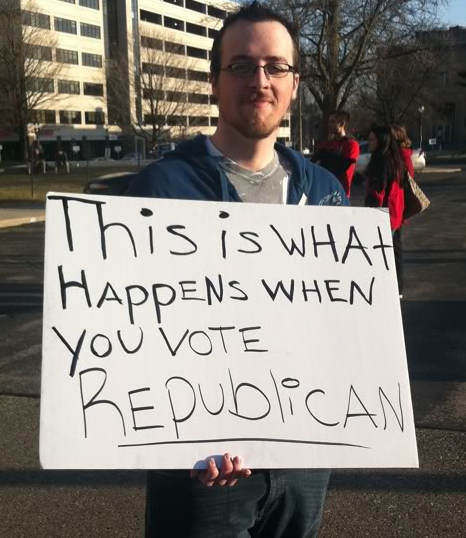 Outside of the entire west side of the state of Michigan (“DeVos country”), the most conservative area in our state is undoubtedly Livingston County, home of Howell and Brighton and a bastion of tea party fervor. Republicans dominate so completely in Livingston County that, in some races, there often isn’t even a Democrat on the ballot. Nobody wants to be the sacrificial lamb who gets slaughtered on Election Day.

This one-party dominance has led to Republicans and their corporate benefactors getting away with some egregious things. For example, back in 2012, the year after Republicans passed the Emergency Manager law, former Republican state legislators Cindy Denby and Bill Rogers passed a law that would exempt wealthier, whiter communities from being taken over by Emergency Managers. Denby and Rogers had a personal interest in doing so because their mismanagement as elected officials created a situation in Livingston County that would have led to an Emergency Manager takeover had it happened in a poorer, less white community.

When their new law didn’t have its intended effect, Denby and Rogers tried something else:

Cindy Denby and Bill Rogers had, during their time as local government officials, gotten their municipalities and county into severe debt when the housing market crashed. Bad decisions by them resulted in Handy Township where Denby was the Supervisor and Livingston County where Rogers was a Commissioner facing severe financial crises over special assessment districts that were created, paid for, and which then fell apart as developers abandoned the projects.

Their financial crises were so severe, in fact, that some feared that these lily white communities may have to be taken over by an Emergency Manager. This was after Denby was overheard saying that the Emergency Manager law was “not intended for places like Livingston County”.

Rogers and Denby tried several times to put a law on the books that would have the state help bail out the municipalities that were put into debt by their mistakes. After three attempts, they were successful. Unfortunately for Handy Township, although they were first in line with their hand out for a state bail-out, they were denied.

Well, Denby and Rogers are back again, trying clean up their mess. This time, it’s by allowing the County to assume the debt and then giving the local municipality a virtually (or in some cases and actual) interest-free loan.

These days, it appears that Livingston County Republicans, who hold every single seat on the County Commission, are, at the very least, mismanaging a program designed to help veterans:

Voters approved a county-wide millage for veterans’ services in August of 2016. Democratic Party Chair Judy Daubenmier says that the county has failed to live up to the promises made to veterans when they asked voters to approve the millage. She alleges commissioners have failed to oversee implementation of the millage, and have allowed the Veterans Services Committee, whose members they appoint, to stymie attempts to implement more programs and services, including more benefit counselors, mental health services and outreach.

She tells WHMI that she surprised at a county commission meeting last week when Veteran Services Committee Chairman Hansel Keene said they only had a balance of $80,000 at the end of the fiscal year. […]

A little math shows that, rather than Keene’s contention that they had a balance of only $80,000 at the end of the fiscal year, they should actually have over $1 million left. It was later revealed that there was, in fact, over a $1 million left in their account, money that is not being spent on veterans services. Keene claims that the unaccounted for funds are for “transitional housing” for veterans. However, as the Livingston Post points out, no such program is listed on the County’s veterans website.

The Veteran Services Committee is now the subject of a Michigan State Police criminal investigation resulting from a complaint from a woman who donated $400 to the Committee and was unable to get a receipt. When the director of Livingston County Veterans’ Services, Adam Smiddy, began looking into the matter, he was fired.

It’s not just elected Republican officials and their appointees who are abusing their power. The local business community appears to be helping them maintain that power. The Brighton Chamber of Commerce recently sent out a notice about an October event titled “The Power Luncheon: Meet the Candidates!” The email said that it would include “a panel of political incumbents”. However, the only people invited were Republicans, some of whom are not “incumbents”:

The Power Luncheon: Meet the Candidates! event is co-hosted by Ann Arbor SPARK and is set to take place Friday, October 5th at the Oak Pointe Country Club. In an e-mailed invitation to chamber members, the gathering is billed as featuring, “a panel of political incumbents” including 8th District Congressman Mike Bishop, State Senate candidate Lana Theis, State House candidate Ann Bollin and State Representative Hank Vaupel. But neither Theis nor Bollin are incumbents. Theis is running against Democrat Adam Dreher for the 22nd State Senate seat and Bollin is taking on Democrat Mona Shand for the 42nd State House seat. In addition, a picture accompanying the invitation featured Republican U.S. Senate candidate John James, who is challenging incumbent Democrat Debbie Stabenow.

When questioned about the discrepancy, Chamber President Pam McConeghy told WHMI the Political Power lunch is something they “do every year with incumbents (and that) whoever is elected in after November will be in our next political power lunch. We are non-partisan, just asking our incumbents to participate. Nothing off the normal.” When asked about Bollin’s participation despite not being an incumbent, McConeghy said she was “only representing as a member of our board” while James would not be present. She offered no explanation as to Theis’ participation, despite not being an incumbent.

A screenshot of the event webpage posted by The Livingston Post shows that it was originally called “Economic Development Power Lunch: Meet the Candidates!”, listed John James as a participant, and had the URL https://www.brightoncoc.org/events/details/economic-development-political-power-lunch-21358. However, the event name has since been changed to “Economic Development Power Series: Annual Legislative Luncheon”, no longer lists James as a panelist, and now has the URL https://www.brightoncoc.org/events/details/economic-development-power-series-annual-legislative-luncheon-21358.

Ann Arbor SPARK pulled their sponsorship of the event when it became clear that it was nothing more than a Republican political event.

All of these things (and frankly many more) show the dangers of one-party dominance in a community. Republicans in Livingston County act with impunity because they have no serious challenges and they are aided and abetted by the business community who stand to benefit from their pro-business owner, anti-worker ideologies.

This year, we have a choice. If you live in Livingston County, consider supporting Elissa Slotkin, Mona Shand, Colleen Turk, Adam Dreher, and Debbie Stabenow with your time and money. It’s long past time to end this Republican dominance, dominance which has led to unfortunate consequences for the people of Livingston County.