The Thomas B. Fordham Institute is a conservative think tank focused on education policy issues. One of their frequent contributors is a person named Dale Chu. Full disclosure: I do not know Mr. Chu, we’ve never met, and I’ve only glanced at his blog posts in the past. I do know that I’ve never run across any of his scholarly policy work in my readings, or seen him speak at any major educational conferences I’ve attended over the years–but could chalk that up to our running in different academic circles. And I’m sure he’s never heard of me, either.

Now that we have that out of the way, I was simply flummoxed after reading his latest effort for the Fordham folks, “The million-dollar question: What will it take to improve education in America?” I’ve got to hand it to Mr. Chu: he’s got that academic title generation thing down, colon and all. And as someone who spends an inordinate amount of time thinking about how to improve education in America, he had me at the title–I was hooked.

So in I dove, only to find an embarrassingly flimsy Top 10 mist of Mr. Chu’s “ideas” to improve our schools. Coming “from someone who spends his waking hours ruminating on the subject,” as Mr. Chu describes himself, I was hoping to see a thoughtful, well-reasoned list of topics that are currently impacting America’s public schools–the schools that 90% of our kids attend. Things like school funding, teacher pay, teacher evaluation systems, standardized testing, and a whole raft of other pressing problems.

Instead, what I found was a flimsy set of ideas based on a breathtakingly uninformed premise:

“What’s the goal of our education system?” The idea of “improving” anything suggests measurement, and it’s easier to assess progress when there’s a clear end in mind. These days, a popular goal for our schools is workforce preparation, which has been in large part driven by business-led reform coalitions.

At the risk of being rude, no and no.

It’s not a “popular goal” of education to produce a workforce–that’s a by-product of schooling, not a goal. Reasonable persons can disagree on the “purpose(s) of education”, but it’s really not something so narrow and restrictive as “workforce preparation”–unless you own a widget factory, and would like the public schools to offer more “widget making” classes, so you don’t need to provide any workplace training on widget making, thus saving your business millions in additional employees to develop and teach these classes, and resulting in an abundance of “trained” widget makers, so you can further reduce the starting wages of your annual crop of novice widget makers. But I digress…

Perhaps even more disturbing, however, was Mr. Chu’s assertion that “the idea of ‘improving’ anything suggests measurement”, a statement that reveals an exceedingly regressive and atomistic view of how human beings operate in the world–and especially in schools. Contrary to Mr. Chu’s apparent belief that we “measure what we treasure”, I’d suggest that exactly the opposite is actually true–that the things we love best, and value the most, are precisely those things that are the most resistant to being measured. And if you doubt this to be true, I invite you to try a little experiment tonight: When you get home from work, or school, or whatever you spent your day doing, walk into your house or apartment or dorm, and tell your friend, partner, roommate, or spouse how they did today in meeting your needs, expressed on an “A to F” grade scale. And if you happen to be a parent, assign grades to your children based on how much you love them. And then please let me know how that works out for you. But I digress, yet again…

After the shock of this garbled premise wore off, I plunged into Dale’s list of ideas, and here are a few of my thoughts–which are exactly as random as his list:

To be sure, more change still needs to happen. Over 80% of the nation’s teachers are white, and there’s an urgent need for more teachers of color, more women in science and math, and more men in elementary schools. We also need more teachers who are bilingual, and more teachers who are prepared to work with children with special learning needs. Also, we simply need more teachers–the constant attacks on teaching as a profession, under the guise of “More Accountability!,” have taken a toll, and the teaching shortage grows more acute by the day–especially in our urban and rural communities. 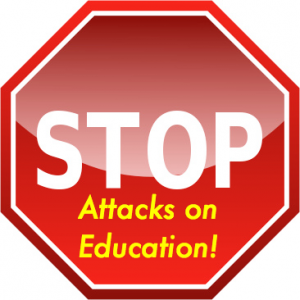 We also need to expand and enhance what we are teaching so that it’s more relevant and meaningful to an increasingly diverse audience of learners in our schools. We need to teach and celebrate more kinds of music, art, and new approaches to teaching history and social studies, always taking care to tell the stories of all of our learners–not just the ones whose stories have been privileged over the years. 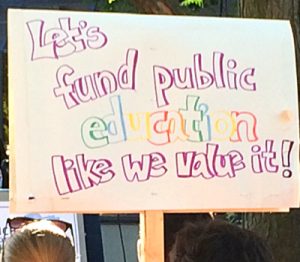 And we need to put our money where our mouths are, devoting the resources to the things we say that we value–our children and their education–by fully funding our schools, maintaining and rehabilitating our school facilities, paying our teachers respectable salaries (so they don’t need to work 2 and 3 jobs to make ends meet), and improving teachers’ working conditions (which equal students’ learning conditions.)

Interestingly, none of the things I’ve just mentioned managed to even crack Mr. Chu’s Top 10 list, suggesting that his “million dollar question” wasn’t really a very serious question at all. Which he would have known if he’d simply asked a teacher.