The Pink Wave Crashed in Michigan this Week

The headline of Tuesday’s election is that pissed-off women are voting Democratic.

That’s what propelled Gretchen Whitmer to win a straight-up majority in a three-way race for governor and all 83 counties. That’s why women won most of the key congressional races in the state — particularly in those Democrats need to flip in November, the 7th, 8th and 11th. That’s why unknown women toppled two male state legislative incumbents and came close in others.

So if your analysis of Aug. 7 doesn’t include women, you’re missing a big piece of the puzzle. 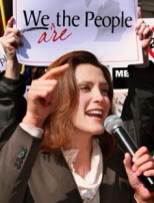 The national media missed this story with their boring Hillary Clinton vs. Bernie Sanders redux premise. I talked to several national reporters who could not be disabused of that idea and wrote lovely paeans to Abdul El-Sayed and his likely victory.

In reality, the race was always more interesting than that (and I’ve never understood, as someone who was a longtime political reporter, why anyone would want to write the same story as everyone else).

Very few reporters were interested in the idea of women driving this election, even though they’ve been the backbone of the #Resistance and Indivisible groups. I was asked, time and time again, about El-Sayed’s framing that Whitmer was beholden to Blue Cross Michigan because her father ran the nonprofit at one time. Many reporters seemed befuddled when I pointed out that other candidates weren’t being asked about their family ties — and that female voters were upset about a highly accomplished legislative leader being constantly asked to answer for her dad.

Anyway, voters had other ideas. Republicans should be very worried about the infrequent voters and ticket-splitting women who came out in droves on a sweaty August day to vote in the Democratic primary. And the number of female candidates who won their primaries in targeted legislative seats should make for a very interesting general election.

Finally, there’s a certain irony that much of the political and pundit class has spent the last 21 months whimpering that the lesson from Clinton’s 2016 defeat is that women can’t win at the top of the ticket. That’s why so many (white) men were bandied about as possible gubernatorial candidates.

Gretchen Whitmer just proved them very, very wrong Tuesday night. She is the strongest candidate Democrats could nominate for governor this year.

There’s a pink wave in Michigan and nationwide. Ignore it at your peril.