UPDATED: Michigan’s primary shows that Democrats are fired up, mobilized, and unified (and mostly behind women) 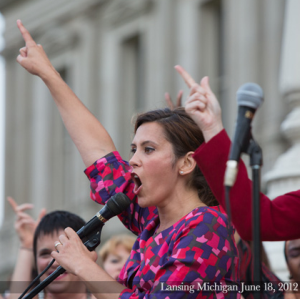 Michigan has long been a bellwether for the national political landscape and, judging by the results of our primary last week, the November general election will be as much of a wave election for Democrats as 2010 was for Republicans.

Shri Thanedar’s attempt to purchase a governorship with his personal fortune was resoundingly smacked down by voters. He did only marginally better than the new nominee Gretchen Whitmer in Detroit where he spent millions up on millions of dollars trying to convince voters he, a multimillionaire, was the candidate who would best represent their needs. This is despite the fact that he has never done anything remotely helpful to black Americans. Whitmer, on the other hand, won every single county in the state. This, combined with the fact that she got over half of the vote, shows that there was no regional divide in the governor’s race. Simply put, Whitmer, who visit each of Michigan’s 83 counties during her campaign, is popular everywhere. Even in super-liberal Washtenaw County, Whitmer was the top vote getter.

The final two polls had Whitmer getting 40.8% and 49% of the vote. In the end, they were wrong. Despite hopes of El-Sayed’s supporters and although he did better than the polls suggested, so did Whitmer, who got a jaw-dropping 52%.

But that’s not all. Despite a rancorous primary campaign where both of her opponents went negative, Whitmer kept her head above the fray and, outside of a few isolated pockets of “Abdul or bust” types, the buzz on social media is that Democrats, liberals, and progressives all over the state are ready to work together to ensure that Republican Bill Schuette’s lifelong effort to become the governor of Michigan will crash on the rocks of a rational, compassionate, caring electorate.

Leading up to primary day, I was assured by many so-called “true progressives” that El-Sayed’s supporters would simply walk away if their candidate didn’t win. I chided them for suggesting that his supporters were little more than petulant brats who would rather hand over the state to one of the most odious corporatist politicians we’ve seen in Michigan than to support a women who most know as a solid progressive from the beginning of her political career. I find it a bit ironic that I had a higher opinion of El-Sayed’s supporters than the “true progressives” did.

The big news out of Michigan’s primary, for me, was the turnout, however. 985,249 votes were cast in the Democratic gubernatorial primary but almost 141,000 MORE people voted for Democratic candidates. Whitmer herself got over 86,000 more votes than Calley did. Given the historically terrible turnout by Democrats in midterm elections (especially primaries), this is an astonishing result and it bodes very well for ALL Democrats in November.

I’m proud of Democrats for rejecting Thanedar’s attempt to buy this election. He spent over $50 for each vote he got but didn’t even get a fifth of the vote. Unlike Republican voters who put an unqualified multimillionaire on the ticket in 2010 (Rick Snyder), Democrats saw through Thanedar’s phony progressivism.

Finally, as Susan Demas pointed out in her piece the day after the election, “The Pink Wave crashed in Michigan this week“, it is clear that women, who make up the majority of eligible voters, have decided it’s time they begin to be represented at ALL levels of government. Elissa Slotkin won in the 8th Congressional District, trouncing her male opponent and winning every single precinct. Haley Stevens defeated a long-time Democratic leader, Tim Greimel, and another man, as well, to secure the nomination. And, in what I think was the biggest shock from our primary, incumbent state senator David Knezek was soundly defeated by a woman, Betty Jean Alexander, who ran an under-funded and low key campaign and won by ten points. Women are clearly running strong in 2018.

This may be the most significant difference this year, particularly when you look who will be on the ticket in November. Democratic women are on the ballot for:

That’s more than half of our Congressional seats and this list doesn’t include the countless* state House and Senate seats where women won, as well (see UPDATE below.)

Fears that talk of a “Blue Wave” would make Democratic voters complacent seem unfounded. Michigan Democrats are ready to work hard together to ensure victories at all levels and that, in final analysis, is what will make 2018 a wave election, the likes of which hasn’t been seen in a very, very long time.

*UPDATE: I originally wrote “countless” but, as it turns out, Eclectablog webhost and the ACASignups.net guru Charles Gaba HAS counted them. Outside of a potential error or two with gender non-specific names, by his figures, 75 out of 148 state legislative nominees are women. Again, that’s over half. Not only that, there are 14 Republican-held state house seats and 9 Republican-held state senate seats where the total Democratic vote either out-performed the total Republican vote or came within in 10%.

This is unprecedented and is precisely the sort of turnout we need to overcome disgusting but highly-effective Republican gerrymandering. Then, once the non-partisan gerrymandering ballot proposal passes, we can redraw the districts after the 2020 election and start being competitive once again. Once that happens, this blue state will be properly represented in the state legislature and in Congress.