Why are *you* angry? Are you Red or Blue? 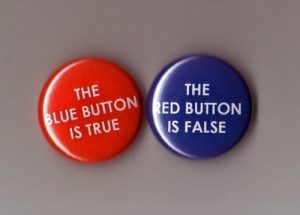 Everyone is angry. I get it. Our country is as divided as I can remember it being in my lifetime. Friends are divided. Institutions are divided. Families are divided. People that never seemed to be “political” are suddenly, and surprisingly, strident defenders of a particular belief or position–or equally vocal about being against that position.

Everywhere you go these days it seems as though someone is really, really angry. On the roads. Walking down the street. In restaurants. And bakeries.

But what are you angry about? Because it takes two different beliefs about something to create the tension that often leads to anger. And what you are angry about says a lot about what you believe in, and who you are as a human being.

Broadly speaking, it seems that there are at least two loosely organized groups of people who seem angry in our country these days. Let’s call them, for simplicity’s sake, The Blues and The Reds. And let’s take a look at what these groups think about some of the major issues we are facing as a nation–and what so many are so angry about.

The Blues believe that…

The Reds believe that…

Do students at poorly performing schools have a constitutional right to a better education?

On Friday, a Federal District Court judge in Michigan decided that they did not when he dismissed a class-action lawsuit filed by students at troubled schools in Detroit.

The lawsuit, which a lawyer for the plaintiffs said was the first of its kind at the federal level, named Michigan officials including Gov. Rick Snyder as defendants because the state had played an outsize role in managing Detroit’s schools while the school district, and the city, struggled with a lack of resources.

The Michigan attorney general’s* office, whose lawyers represented the state and argued successfully to have the lawsuit dismissed, referred questions about the case to Mr. Snyder’s office, which did not respond to requests for comment on Tuesday.

* Note: The “attorney general” mentioned above, Bill Schuette, is also the leading candidate to replace Snyder as the state’s next chief executive.

At the end of the day, each individual has the right to choose what we want to be angry about. And each of us needs to decide if we believe it’s more likely that most of the population is made up of lazy, dumb, greedy freeloaders who expect the government to take care of their every need, or if a small percentage of unbelievable wealthy persons is benefitting so grossly from taking advantage of their power and privilege.

Or, to paraphrase the old saying, “Equity and fairness in America is in peril because so many of our friends, neighbors, and relatives see themselves not as exploited worker drones for the ruling class, but as temporarily embarrassed millionaires.”