REMINDER: Putin’s attacks on our democracy work because Trump is a traitor

We know Trump is willing to betray this country. The only question is if this time the press will dare to call him out for it. 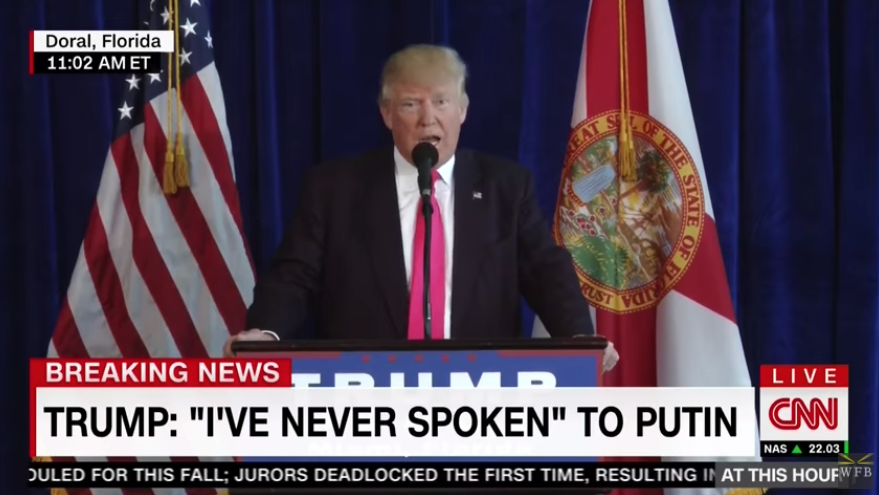 The Russian intelligence agency behind the 2016 election cyberattacks targeted Sen. Claire McCaskill as she began her 2018 re-election campaign in earnest, a Daily Beast forensic analysis reveals.

In August 2017, around the time of the hack attempt, Trump traveled to Missouri and chided McCaskill, telling the crowd to “vote her out of office.” Just this last week, however, Trump said, on Twitter, that he feared Russians would intervene in the 2018 midterm elections on behalf of Democrats.

Same old formula: Russia, at Trump’s direction or encouragement, hacks a Democrat. Trump refuses to blame Russia and instead attacks the victims of the hacks. Hacks turn into leaks and the GOP, led by Trump, weaponizes the information. The press, bound by a commitment to neutrality that favors bad faith, acts as if this is all very normal.

That’s what happened in an election Trump “won” squeaking a 70,000-vote advantage in three states and it’s what we should expect in the next 100 days.

Of course, there are other hacks to be expected like the hacks of voter registration roles and the Clinton campaign analytics identified by Special Counsel Robert Mueller’s team in its most recent indictment. And there’s the hacks we should be most worried about, the ones of the U.S. power grid that could leave us without electricity in the dead of winter or summer, which are an actual national security threat but haven’t yielded one even one tweet from the president of the United States.

But let’s focus on the hacks Trump loves most — the leaked private emails that allow him to tar his opponents as being as venal, corrupt and disloyal as he actually is. These were the hacks that made the Trump-Putin conspiracy is so obvious that worst conspiracy theory of all is to suggest this collusion could be somehow the result of a series of remarkable “coincidences.”

Trump’s team recognizes that they’re in tremendous legal peril if the rule of law still exists, which is why they’re working so hard to deny Trump had foreknowledge or any knowledge of the Trump Tower meeting with the “Crown prosecutor” of Russia until 2017. Thus Trump’s entire defense hinges on the us believing that a son whose entire life is a sad plea for his dad’s attention didn’t tell his dad the only interesting thing happening in his entire existence.

Of course, him not knowing still isn’t a good enough defense for Trump’s treachery.

The conspiracy is obviously still active and it can definitely work again and is one of the main reasons I’m worried that people are overestimating Democrats’ chances of retaking the House.

There are several reasons this could work again.

Foremost, our government has done nothing significant to make sure it doesn’t. There’s no central strategy for election security almost two years after the worst attacks on our democracy in our existence. The money that has been given to states is generally too puny to fund the wide-scale reforms to our electoral system necessary. And Trump has proven he will accept Putin’s word over actual U.S. intelligence as every “harsh” action taken against Putin’s regime is overwhelmed by Trump’s rhetorical appeasement and embrace of Putin-friendly policies determined to shatter European alliances.

But let’s never forget the main reason why Russian hacking can still work: Trump is a traitor with no loyalty to this country or our laws.

We knew this from not just the way he refused to serve or ever do any public service or the way he lied to veterans groups about donations or the way he let his fellow citizens pay his taxes as reaped the tremendous benefits that come with being born rich, white and male in America.

We know this because he is willing to use information stolen from Americans by the Russians to undermine our elections in a way no other major candidate in American history has.

Trump knew firsthand Russia was trying to help him and even acknowledged as much when he asked his allies to hack Hillary Clinton. (Check out how he looked directly into the camera to clarify his seriousness when asked for Clinton’s emails.) The U.S. government warned the leaked files from Wikileaks were the result of Russian hacks and Trump still mentioned them 141 times in the month before the election.

Trump is now planning to campaign almost full-time in the weeks leading up the election. Is there any doubt he’d use similar tactics again?

Which leads to the last reason this all can work again. Trump paid little reputational cost for actively conspiring with the Russians before the 2016 election, instead the press ran interference for him as they pummeled Clinton over private details in private emails that mostly veered toward trivialities and called anyone, such as Sarah Kendzior, who dared explicate Trump’s obvious connections to Putin a conspiracy theorist.

And they seem to have learned nothing from this, except that we need to need to hear from more Trump supporters who’d back Trump if he sold one of their kidneys for a Diet Coke.

We know Trump is a willing traitor. The only question is if this time the press will dare to call him out for it.