It’s no secret that Michigan is one of the most heavily gerrymandered states in the entire country. Here’s the 11th Congressional District, for example: 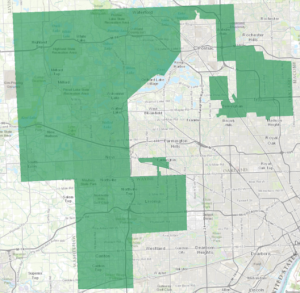 The 9th District is almost as bad: 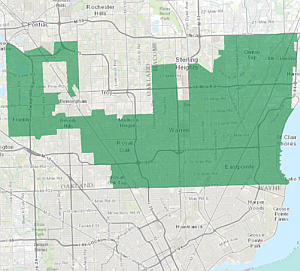 Note that they are both adjacent and interlocking. The 11th District is highly Republican and 9th District is reliably Democratic.

For good measure, here’s the 14th which is another piece of the interlocking jigsaw puzzle in that area: 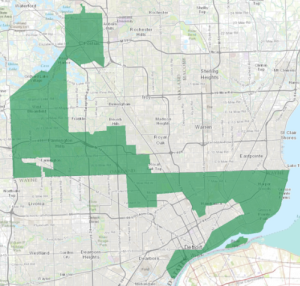 Here’s how all the jigsaw pieces fit together to make sure that all the Republicans are crammed into the 11th District and all the Democrats into the 9th and 14th Districts: 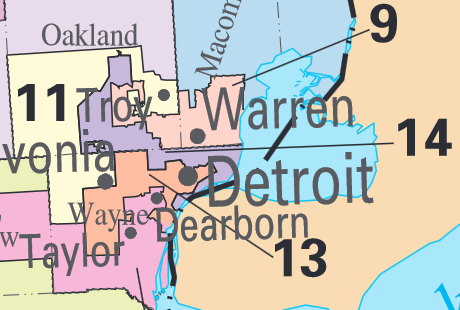 According to reporting by Bridge, the 9th District was described by a Republican operative as “giving the finger to [U.S. Congressman] Sandy Levin”:

Emails have emerged in a federal lawsuit that suggest Republicans gerrymandered congressional districts in Michigan in 2011 to maintain an advantage over Democrats, despite years of claims the lines are drawn without political bias.

The lawsuit references private emails that allegedly show one Republican aide saying a Macomb County district is shaped like “it’s giving the finger to (Democratic U.S. Rep.) sandy levin. I love it.” Another email from a GOP staffer was said to brag about cramming “Dem garbage” into four southeast Michigan congressional districts.

In a third email, a longtime Michigan Chamber of Commerce executive predicts the maps will keep Republicans in power for years — and implies the 4th Congressional District in the central Lower Peninsula was drawn to the wishes of Dave Camp, a longtime Republican congressman from Midland who has since retired. […]

The emails were introduced this month as evidence in the League of Women Voters of Michigan’s ongoing federal lawsuit alleging the 2011 state legislative and congressional maps are so gerrymandered they violate the U.S. Constitution.

The Republican redistricting efforts were led, at least in part, by corporatists in the Michigan Chamber like Robert LaBrant, the Chamber’s former Chair and Jeff Timmer, a former member of Michigan’s Board of State Canvassers during the “Fontgate” debacle to derail the repeal of our odious Emergency Manager law back in 2012. You can read about Timmer’s “work” in multiple articles here on Eclectablog (I encourage you to read THIS ONE, in particular.) He’s quoted in the Bridge piece as saying that if voters don’t like Republican gerrymandering, they have “recourse, and it’s called elections”. Of course, it’s these very same elections that Timmer is referring to that are now so totally unfair thanks to their partisan gerrymander success.

Here are some examples of the emails which show that Republicans have been working on gerrymandering the living daylights out of Michigan for years (from the Bridge reporting):

Citizens Research Council of Michigan president Eric Lupher says that both sides do it but don’t admit to it. This is entirely untrue. In this same article, former Michigan Democratic Party Chair Mark Brewer explicitly says Democrats do it when they are in power, something I personally heard him say in a public meeting back in 2008. It’s Republicans and their corporatist benefactors who gaslight Michigan voters by pretending they are doing this for altruistic reasons.

With YOUR help, it’s entirely possible this shameful practice will come to an end after November, however. The “Voters, Not Politicians” (VNP) ballot proposal has gathered enough signatures (and then some) to put revising the state constitution to create a new, independent redistricting commission on the ballot. However, the Michigan Chamber is spending hundreds of thousands of dollars to fight it and currently has it tied up in the State Supreme Court, contending it’s unconstitutional, despite a unanimous decision by a lower court saying that it’s fine. For their part, VNP is not waiting on the Supreme Court to weigh in. They have released their first ad this week, aimed at educating voters about this anti-democratic practice in our state:

This is a non-partisan issue. Although Republicans like gerrymandering because of the political power it has given them, it actually makes the votes of people from all political persuasions largely irrelevant because of the heavy concentration of Democrats in some districts and Republicans in others. If you are a Republican in Ann Arbor, for example, you can vote for Republican candidates from now until the cows come home but those candidates have almost zero chance of ever getting elected. It’s the primary reason why so many conservatives run as Democrats in that area.

But VNP needs support. Please consider giving them a financial contribution to ensure that their ballot proposal becomes law and our elections can once again be fair and democratic. You can do that HERE.