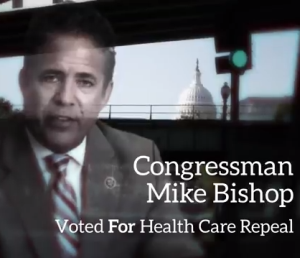 In 2012, MI-08 Republican Congressman Mike Bishop was running for Oakland County Prosecutor against Democratic incumbent Jessica Cooper by whom he was defeated. In 2014, the Oakland County Clerk sent Bishop a notice that he was being assessed a fine for a late quarterly campaign report. It was a paltry amount — just $150 — money he probably could have scrounged from the pocket lint of multimillionaire Matty Moroun in whose pocket he spends an enormous amount of time.

But Bishop didn’t pay it.

In November of 2014, Bishop tried to dissolve his campaign committee but, because of the outstanding fine, he was denied.

Two weeks later, the County referred the matter to Attorney General Bill Schuette but it was to no avail. Schuette didn’t act to get his recalcitrant Republican pal to pay up and, if you look at the list of candidates who owe money to the County, four years later Bishop’s name is still on it.

Making minor errors like being a bit late with your campaign finance filing isn’t a political career extinction event. Most candidates just do what they have to do to get right, pay their fine, and move on with little fanfare. And $150 is, as I have already said, a mere pittance, especially to a wealthy guy like Mike Bishop who, until he was elected to Congress, was performing various consulting and lobbying activities for Matty Moroun as well as for Foreclosure King David Trott (check out this piece for a history of Bishop’s ties to both Moroun and Trott which details how he has used his elected position to benefit his benefactors for years.) But, apparently, Mike Bishop thinks he’s above the law and when he won’t pay even his small bills, it once again calls into question his judgment and credibility.

Oh, and did I mention that Bishop wants to dissolve the Department of Education? He does. Perhaps he just wants to keep his constituents too ignorant to notice how corrupt he appears to be.

MI-08 in is desperate need of better leadership in Congress so let’s hope Bishop gets swamped by the Democratic blue wave in November. This is a distinct possibility given that the 8th Congressional District, which went for Trump by 7 points in 2016, has gone from “Lean Republican” to “Tossup” in Cook Political Report‘s rankings. This largely on the strength of the candidacy of Elissa Slotkin, an impressive candidate who has the best chance of taking this seat back from Republicans since Debbie Stabenow held it from 1991-2001. You can donate to Slotkin’s campaign HERE.