In ‘Voters v. Politicians,’ Michigan Republicans side with the politicians 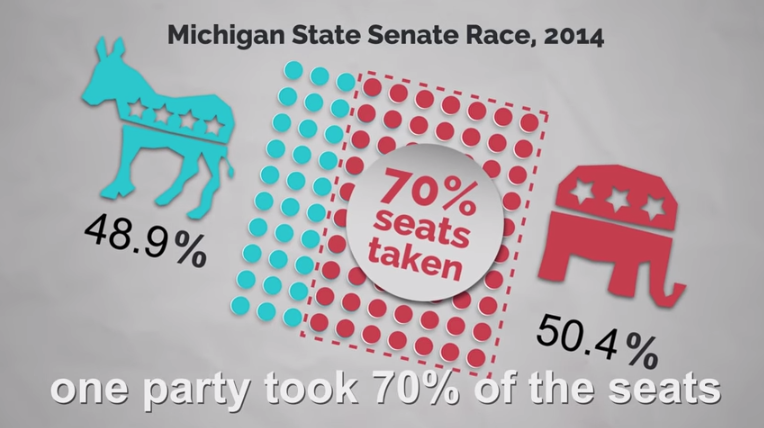 Michigan’s Supreme Court announced on Friday it will review an unanimous Court of Appeals decision that ruled the independent gerrymandering reform proposal backed by Voters Not Politicians should appear on November’s ballot. Plaintiffs argue the changes sought to the state’s constitution require a constitutional convention.

The grassroots ballot measure backed by the signatures of around 400,000 residents has faced opposition from the Michigan GOP, the frontrunner to be the GOP’s nominee for governor and the Michigan Chamber, which — as Bridge reports — shares an address with the group backing the complaint against the proposal.

And why wouldn’t they be against it?

Conservatives have a sweet con going.

After a decade of picking the voters who would give them the chance to control more than 60 percent of the state’s congressional seats along with super majority control of the state House and Senate even when their party generally gets around 50 percent of the vote, you can be sure they don’t want to give voters a chance to make their votes count.

Data from the Citizens Research Council finds Michigan’s districts are both “stacked” and “cracked.” That means “an overwhelming majority of voters from the same party are put into one district” AND “regions are split so that one party wins a large number of districts by a narrow margin.”

Thus tens of thousands of Michiganders’ votes are “wasted.”

The feeling that your vote doesn’t count doesn’t just diminish a citizen’s most precious (and threatened) right, it acts as a subtle form of voter suppression while also hurting your economic security.

“Consumers lose access to credit when their congressional district boundaries are irregularly redrawn to benefit a political party,” finds a study published this year.

When they’re not worried about losing an election because your district has been gerrymandered for your pleasure,” politicians naturally become less responsive to the needs of the people they represent,” NPR’s Shankar Vedantam explained.

These obvious-yet-rarely-stated economic costs are then magnified by the costs of having politicians who only have to cater to one party, who only advocate for the interests of their donor class. In Michigan’s recent history, the corporate elite — ably represented by Michigan’s GOP and Chamber of Commerce — have been able to push policies aimed at busting unions, lowering wages and uninsuring the working poor, though these policies are generally as unpopular as they are unnecessary.

The domination of our government by our corporate overlords is most obvious in the body that will likely decide whether independent gerrymandering reform will make it to the ballot.

Republicans control the Supreme Court by a 5-to-2 majority.

Bridge reports the Michigan Chamber held a fundraiser for Kurtis Wilder and Elizabeth Clement, Republican justices running for reelection, in April and the Brennan Center for Justice found the Chamber to the  third highest source of outside money and the largest source of “dark money” spent on state Supreme Court races in the entire nation.

Now hopes of restoring fair representation in this state resides in prayers that two Republicans will reject a plea backed by their largest potential donors.

And it’s a bit of a sick reminder why our state Supreme Court elections are so crucial.