I’m constantly on the lookout for new writers for Eclectablog and my eye is always on writers who bring a different perspective than we already have. We have three white men and two white women writing for us so we have those demographics pretty much nailed down and it’s important to me that we are a diverse group.

Today I am thrilled to announce our newest contributor, Ammara Ansari. Ammara is a Muslim millennial woman from southeast Michigan (Canton, to be precise) who is pursuing a career in politics, working for candidates and, in 2016, as a field organizer for the Michigan Democratic Party.

Before we publish Ammara’s first essay, I thought we’d get to know her a bit so here’s a short interview. Please give her a warm Eclectablog welcome to our progressive family! 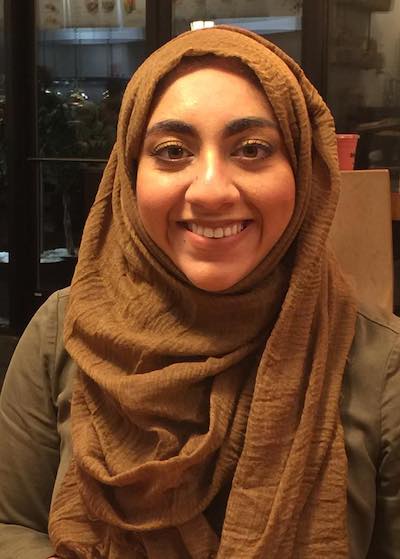 Welcome to Team Eclectablog! Tell us a bit about yourself and how you came to be in southeast Michigan.

Thanks so much for welcoming me into the team! I am a second year Masters in Public Policy student at the Gerald Ford School of Public Policy at the University of Michigan (#GoBlue). I am also a board member of the Canton Democratic Club. I’m originally from northern Virginia and graduated from the University of Virginia in 2016, after which I moved to Canton, Michigan with my family. My dad actually grew up in Michigan so he’s always had an attachment to the Mitten State. I absolutely love Michigan and the people that I’ve gotten to know here.

How did you end up working in politics? Talk about what motivates your activism and what sorts of issues are most important to you.

I graduated with no job offer in my hands. But with the encouragement of my parents, I started to look around and even began volunteering for the Clinton campaign. One of my friends told me that the campaign was hiring field organizers across the state and I got the job! It was my first campaign and for almost five months I recruited volunteers, made calls, knocked doors, and registered voters for about 90 hours a week. More importantly, I wanted my young sister to know that Muslim women can do anything. I wanted her to know that not only was she as American as anybody else, but also that she had a duty to her community. She could not sit around and expect for change to come. So yeah, I care about justice and fair treatment of others. I’m also really passionate about U.S. foreign policy and international relations.

Who are your heroes and role models and why?

My parents. Hands down, my parents are the most influential people in my lives. I would only visit them twice a year when I was an undergrad and now, even if I have to go somewhere for a week, it’s difficult for me to leave them. They are hardworking and honest people who have always taught me to treat myself with respect and to never hurt or take advantage of others. They’ve always pushed me to be strong and to pursue passions that benefit both me and my community. And despite all the struggles they’ve faced, they’ve managed to stay true to their values.

What types of things do you see yourself writing about at Eclectablog?

I’d love to write about a bunch of different topics for Eclectablog! When it comes to Michigan specifically, I hope to focus on civil rights, minorities in politics, the environment, and elections. I’d also like to discuss foreign policy issues and how they affect everyday Michiganders.

If you could be doing anything you want in five years, what would that be?

I think I’d like to be a policy analyst and legislator in Lansing! I also have a passion for languages and intend to continue after I graduate. I hope to use my linguistic skills to do some foreign policy work at the federal level in the future.

What’s one interesting thing about you that most people don’t know?

I feel like people who know me pretty well easily catch on to this, but…I have an obsession with Disney movies. I mean, seriously. They’re animated and they’re classics – it doesn’t get better than that! I sometimes fish for Disney lyrics in a bunch of languages and try to learn them too. Sure, there are definitely problems with Disney movies but I can’t get enough of them!

What question should I have asked and what is your answer to it?

You should have asked, “Do you have any pets?”! And my answer is that I absolutely love cats and now I have a pet kitten. He’s got long grey hair and he’s a hyper little rascal! I think we’re calling him “Shibbel” which means lion cub in Arabic.

Welcome aboard, Ammara. We’re glad to have you on the team!