The sinister motive behind Trump & DeVos’ plan to “harden schools” 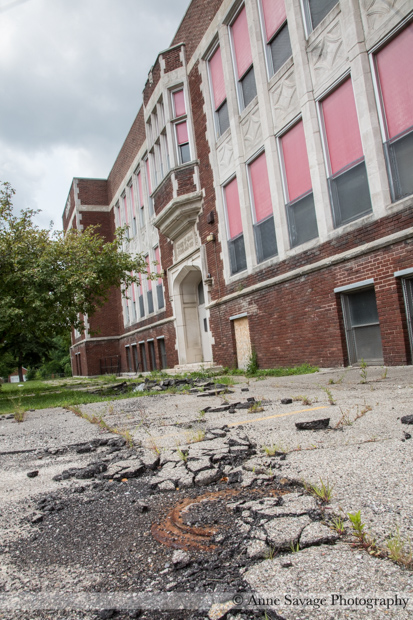 The news has been full of reports over the last few weeks on the need to “harden” our schools in response to the seemingly daily onslaught of school shootings in our nation. Many of our elected officials, such as President* Donald Trump and Secretary of Education* Betsy DeVos, have called for teachers and other school personnel to be given firearms training and carry loaded weapons into classrooms–ostensibly to protect their students in the event of a potential tragedy.

There have also been calls to increase the number of armed security guards stationed both outside and inside of all schools, install metal detectors at school entrances, fly armed drones over schools to detect possible threats, and eliminate “gun-free zones” around schools–an idea that Trump believes is akin to saying, “You come into our schools. You’re going to be dead. It’s going to be fast.”

To be sure, there hasn’t been a lot of deep thought put into any of these ideas, certainly not by the president*:

“We have to harden our schools, not soften them up,” Trump declared, adding that gun free zones are like “going in for the ice cream” for potential school shooters. The President continued “I want my schools protected just like I want my banks protected,” explaining “If you harden the sites you’re not going to have this problem… When you say this school is gun free… That’s what they want to hear.”

The Trump/DeVos vision of our nation’s schools is a truly dystopian one: dreary, dilapidated, locked-down cinder block structures “hardened” with armed security guards, flying drones, grizzly bear fences, and massive banks of metal detectors at every door. Once a person is granted entrance to this fortress they would be greeted with the following scene, straight out of an NRA fever dream:

The school receptionist is apparently the first line of defense against any active shooter. Thus the task force recommends that school front offices be protected with two sets of automatically locking doors, preferably constructed with “ballistic protective glass” like the neighborhood liquor store. Such a set up will allow the front office staff to safely trap a potential shooter like a bug in a window screen until help arrives. The report recommends reinforcing the front desk and side wall with “ballistic steel plating” that employees could hide behind should the shooter get past the entrapment area.

Walking through the halls of this gulag, a parent or other community member would be greeted by pistol-packing secretaries, cafeteria workers, teachers, and custodians, charged with defending their students from potential threats with school-issued weapons and a few hours of district-provided professional development on target shooting and gun maintenance–in addition to their current responsibilities of teaching, feeding, and caring for their students. One shudders to imagine the impact of these “hardening” measures on student learning, student-teacher relationships, creativity, and innovation–all of which have been frequent targets of Sec.* DeVos’ attacks on public schools and teachers.

We should also be concerned about the effects these measures would have on the community’s relationship to their public schools, and here is where the “dark side” of the Trump/DeVos plan to “harden” our schools starts to rear its ugly head.

For well over a century, our public schools have functioned as the center of community life across the country. Friday night football games, Memorial Day parades, school musicals, band, chorus, and orchestra concerts, daycare and childcare programs, swim lessons, libraries, programs for senior adults, dance recitals, blood drives, voting places, school board meetings–our schools have been at the core of how our communities gather to celebrate, learn, and grow together. Many schools are open on weekends and well into the evening, and offer programs for children and adults over the summer months as well. Our schools have become community hubs, offering medical care, adult education services, and a plethora of courses, programs, and activities for citizens of all ages.

But there are critics of this function of public education–and notably, Betsy DeVos, and her husband, Dick, are prominent among them.

When asked “whether Christian schools should continue to rely on giving—rather than pushing for taxpayer money through vouchers—Ms. DeVos replied, ‘There are not enough philanthropic dollars in America to fund what is currently the need in education…Our desire is to confront the culture in ways that will continue to advance God’s kingdom.'”

Her husband went even further, sharing his concern about the “displacement” of the church as the focus of community attention by the public school:

“As we look at many communities in our country, the church has been displaced by the public school as the center for activity…[I]t is certainly our hope that more and more churches will get more and more active and engaged in education.”

But for too many of our citizens, a different reality exists: mothers and children trapped in poverty in our inner cities; rusted-out factories scattered like tombstones across the landscape of our nation; an education system flush with cash, but which leaves our young and beautiful students deprived of all knowledge; and the crime and the gangs and the drugs that have stolen too many lives and robbed our country of so much unrealized potential.

Sec. DeVos seems to be in agreement with this characterization…

While the state Legislature continues to debate whether Michigan taxpayers should fund a $715 million bailout of the Detroit Public Schools, we must acknowledge the simple fact that DPS has failed academically and financially – for decades. We need to retire DPS and provide new and better education options that focus on Detroit schoolchildren.

Rather than create a new traditional school district to replace the failed DPS, we should liberate all students from this woefully under-performing district model and provide in its place a system of schools where performance and competition create high-quality opportunities for kids. We shouldn’t create a new district that is nothing more than a DPS retread. Absent urgent and serious reforms, the new district will only continue the downward spiral of poor academic performance, declining enrollment and financial instability we’ve seen for decades from DPS.

It’s worth being redundant to emphasize exactly what is being suggested by this comment: Betsy DeVos, the current Secretary of Education for the United States, is advocating for the total dissolution of Michigan’s largest public school system, and replacing it with some vague constellation of competitively-oriented “high-quality opportunities for kids.” While she didn’t provide any more detail as to what she had in mind, one might assume she’s referring to an array of “for-profit” charter schools, religious schools, home schooling, virtual and online schools, and other “opportunities.”

This is a breath-taking admission, especially coming from a sitting Secretary of Education. As I have written previously:

Absent from Ms. DeVos’ “analysis” here is any “acknowledgement” that DPS’s “failures” were a “manufactured crisis” created by the rotating parade of incompetent Emergency Managers installed by Gov. Snyder, the systematic defunding of DPS by a compliant Republican state legislature, and the virtual explosion of predatory charter schools in the city made possible by the near total lack of accountability or regulations that characterizes Michigan’s charter industry.

Only a “reformer” obsessed with instituting an unconstitutional school choice agenda could turn a blind eye to the plight of thousands of her state’s most vulnerable children and teachers, and call for dissolving a once great city school system in favor of of a dangerously disorganized grab bag of privately-(mis)managed charter, private, and religious schools, closing and opening at the whim of their investors, wreaking havoc on the lives of the city’s inhabitants.

The barely disguised scorn and contempt Ms. DeVos has for Detroit’s children and families is clearly discernible in the vocabulary she uses in her diatribe: “bailout”, “retire,” “retread,” “aggressive intervention,” “closure.”

There is a term for a person brought in to an organization to perform underhanded, controversial, or unscrupulous tasks, like mass firings and company closings: this person is known as a “hatchet man”.

Betsy DeVos is nothing more than Donald Trump’s “hatchet man,” tapped for no other purpose than to destroy our public schools, de-professionalize the teaching profession, and privatize what’s left.

There is room for vigorous debate and competing ideas in all areas of public life, including public education. Serious persons might disagree on the best ways to accomplish various pedagogical ends, could debate the merits of “flipped classrooms” and “authentic assessment,” and may argue about what constitutes the most effective ways to evaluate teacher quality.

But tapping a person whose long public record of words and actions betrays an obvious anti-public education mindset to lead the nation’s public education system is an act of clear hostility and aggression that must be forcefully resisted.

Viewed through this lens, the Trump/DeVos plan to “harden” schools can be seen less as a means to protect children, and more as the first step toward a wholesale elimination of our country’s public school system. Given that both DeVos and Trump come from the business world, it’s not surprising that their plan follows the basic tenets of “vulture capitalism” as practiced by Bain Capitol and former presidential candidate Mitt Romney:

So the next time you see an elected official talk about “arming teachers,” or “hardening schools,” remember that there’s a dark side to this plan…they aren’t trying to protect your kids. They are trying to line their pockets, and sell off one of our country’s greatest common goods just to turn a profit.

Our schools don’t need “hardening.” They must remain open, warm, and inviting spaces for communities to come together in ways that promote democracy, equity, and inclusion.

And our children don’t need “hardening,” either. They deserve our best efforts to protect them, but not by turning their schools into prisons, and places of learning into places of fear.