Would the Real Mitt Romney Please Stand Up? 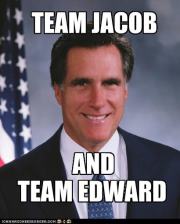 A few weeks ago, I asked you to call Mitt Romney a liar.

I’m not the only one obsessed with Mitt’s lying, of course. Fine minds including Steve Benen, Greg Sargent, Jonathan Chait and Jamelle Bouie have all been struggling with Mitt’s disturbing willingness to dissemble and the media’s even more disturbing unwillingness to call him on his lies.

Mitt would rather be seen as a liar than be seen as what he is: a con man willing to take any position he needs to take to win.

Since the media won’t do their job. It’s up to the Internet. And, as usual, it has delivered. WATCH THIS:

In perfect syncopation, this video by @hmatkin uses every awkward Romney gaffe and quirk to make the case that there is no real Mitt Romney.

Why does this matter? Once Mitt wins the GOP nomination, he’ll be the most unpopular nominee in modern history. But he will be the nominee and if the economy goes sour, he’ll have a chance to make his case. And his case will be, “I’m willing to be whatever you want me to be.” His moderate past will be seen as an advantage.

We need to make clear that the malleable nature of his core may lead to a flipfloppy nominee but it will lead to President FORCED to govern to the hard right. Why? He’ll only be elected if the economy is sinking so he’ll be unable to cut the way he pretends he wants to.

He’ll be forced pander to the right wing even more in order to avoid a primary challenge in 2016. You can’t trust him and neither can the right. Everything he does as President will be geared toward placating Tea Party base of the GOP. Imagine Speaker Boehner as President.

Get this straight: A Romney Presidency will be at least as extreme as a Santorum Presidency.