Imagine clicking on the DrudgeReport and seeing this:

It would be the end of Mitt Romney’s campaign. Why?

Last year, as pundits wondered how the man who implemented an universal health care plan nearly identical to Obamacare could win the GOP nomination, Mitt Romney had an idea.

He argued: See, I’m really all about states rights. My solution worked for Massachusetts—with tremendous federal aid—but because of the 10th amendment, it shouldn’t be implemented in all 50 states.

Mitt was so sure this was a sound argument that he put together a PowerPoint and came to the University of Michigan to present it to a room filled of people who look like Mitt Romney.

And now this argument has completely fallen apart.

BuzzFeed has unearthed a 2009 op-ed by Romney in which he calls on the President to take what he did in Massachusetts as a model for the nation:

Our experience also demonstrates that getting every citizen insured doesn’t have to break the bank. First, we established incentives for those who were uninsured to buy insurance. Using tax penalties, as we did, or tax credits, as others have proposed, encourages “free riders” to take responsibility for themselves rather than pass their medical costs on to others.

This is nearly the exact argument the Obama Administration is using to defend the individual mandate from lawsuits by Republican state Attorneys General.

The individual mandate is the number one reason conservatives HATE this bill—besides the first tax increases on the 1 percent in a generation and it being another successful accomplishment of this President. If conservatives knew that Mitt Romney was lying about why he opposed Obamacare, the one remaining argument for his candidacy would be obliterated.

Luckily for Mitt, they probably won’t. Why? It isn’t on the DrudgeReport.

People argue in this fragmented Interworld Drudge isn’t nearly as influential as it has been in the past. However, it still is the go-to news source for millions of conservatives and hundreds of AM radio talk shows. It sets the agenda and it lets conservatives know what they should be outraged about. And since the beginning of this primary it has been clear that while Fox News and others in the conservative media were ambivalent about Mitt, Drudge wasn’t.

How do we know this? It never once attacked the Governor and instead it was the staging ground for the worst attacks against the non-Romneys. 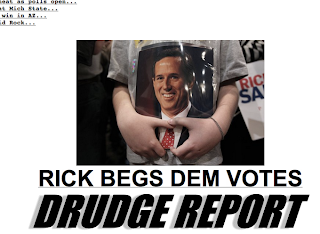