Can We Call Mitt Romney a Liar?

You know the GOP’s favorite Karl Rove tactic: Take an opponent’s strength and make it his weakness. 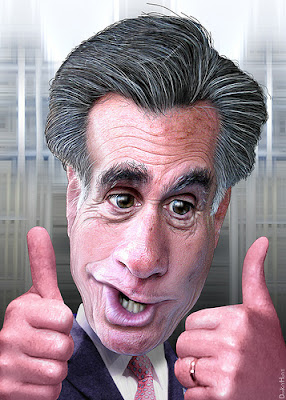 This is how Vietnam evader George W. Bush beat war hero John Kerry. This is why Sarah Palin, who was vetted as well as a pair of shoes purchased online, says President Obama wasn’t properly vetted. This blurs reality and leaves the press reporting the distortion at a higher volume than the truth.

Now to the strange case of Mitt Romney. His greatest weakness is his inconsistency, his willingness to adapt to whatever Dick Cheney, Rush Limbaugh and Pat Robertson believe at any given moment. How do you take this weakness and make it a strength?

No national politician has ever been so malleable. He has to admit that his pro-life views are newer than some iPods. If the human body regenerates itself every seven years, there are still some pro-choice cells left in Mitt. Robert Downey Jr. has been sober longer than Mitt Romney has been anti-abortion rights.

So he’s got that Walt Whitman thing going:

But Mitt has never had multitudes anywhere but in his Swiss bank accounts. He contains talking points. Benjy Sarlin points out that many are abstractions that allow him to make any attack he chooses.

And he lies.I said it. Mitt lies. I admit it even feels as if I’m not supposed to type that. Lawrence O’Donnell points out that the press can’t seem to say a politician is lying. This may be because we assume they all do.

And as the owner of a Politifact “False”, I can tell you that “objective” fact checking services exist just reinforces this premise.But the case of Mitt Romney is special. He just lies so often it’s hard to keep up.

Steve Benen of The Maddow Blog has been noting Mitt’s mendacity (along with his tim-Mitt-ity). And you can feel him growing weary, distressed by the the obligation to document never-ending torrent of Mitt’s falsehoods.And he isn’t alone.

Rick Santorum  has been saying that Mitt Romney has not been telling the truth about the individual mandate. And he’s right.

Mitt supported the individual mandate for Massachusetts then supported it again nationally. When he realized he couldn’t do so and win, he change his position and he lied about ever having supporting a national individual mandate, which he clearly did.  (This all gets so circular.)

Greg Sargent has suggested this Mitt’s lying is a deliberate strategy to make the charges of Mitt being a flip-flopper or a untruthful seem fulsome in their abundance. That makes sense.

But there’s a starker reality here, Mitt Romney lies for one reason: he can get away with it.

It’s our job to make sure that changes. Rick Santorum can’t call Mitt Romney a liar. And most of the press can’t either. But we can. And we should whenever possible.