Blind Trust – n. What you need to vote for Mitt Romney

MITT ROMNEY, Y U NO BELIEVE IN ANYTHING BUT MITT ROMNEY?

There’s only one explanation: Mitt Romney is a robot sent back from the future to destroy Mitt Romney.

How else do you explain this passionate defense of a woman’s right to a safe abortion?

Or who can forget, “I like mandates. The mandates work.”

And here’s my favorite: “The blind trust is an age old ruse.”

Of course, Mitt Romney described a blind trust is an “age old ruse” in 1994. Future Romney knew that the blind trust would become his defense from everything. He’d use it to defend investing in the Cayman Islands and Swiss bank accounts. And he’d throw it out to defend the fact that his old company Bain, which he is still invested in, sells surveillance equipment that may help the government of China spy on their people. 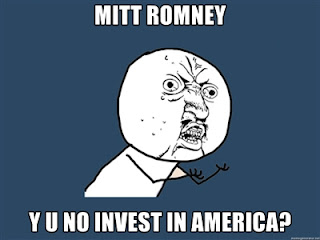 Future Mitt Romney is willing to give up any belief he might have held at any point in his life to win this GOP nomination. But past Romney won’t give up his precious investments abroad until he absolutely has to.

This is why Mitt Romney’s money matters. Not only is he running to give himself a huge tax break, but he’s demonstrated again and again that the way he invests is exactly what’s wrong with the conservative tax policies he embraces.

Trillions in tax breaks for top 1 percent only leads to investments that do nothing for America except make the richest richer. And that’s something that benefits past Romney and future Romney. But not you.