Grandma, why did you have to wait till you were 68 to marry grandma? 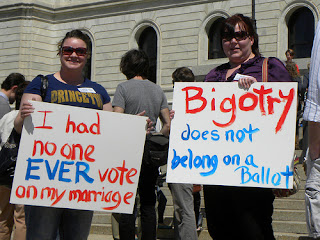 For 59% of college freshmen, gay marriage is as controversial as bar soap v. liquid soap. So when Washington State legalized gay marriage today, I’m still left a bit distraught that these couples had to wait so long to marry the people they love. Even worse, their marriages are still second-class marriages as they are denied many of the federal rights of so-called straight marriages.

Personally, I’m not for GAY marriage. I’m for marriage for all. The fact that right-wingers are pushing for a amendment banning gay marriage proves that Constitution as it is provides for equal access marriage for any two, non-related adults.But I know that point of view won’t prevail soon.

We’re in for another generation of hemming and hawing about this wedge issue for the benefit of the few who pretend they have a monopoly on morality. Even if the recent Prop 8 defeat is upheld in the Supreme Court, it will likely only affect California. I’m afraid that by the time full marriage equality is achieved, most of the people who should ashamed of their resistance to such an inalienable right will be dead.

The opponents of gay marriage are so aware that they’re on the wrong side of history that they’re demanding our rights be put to a vote. That’s Chris Christie’s stand.

Here’s the stand of the man America hopes will run against Christie in 2013, Cory Booker.

How can we speed this up? We have a President who refuses to enforce the ridiculous Defense of Marriage Act. That’s step one. Next step, a Congress who agrees with a majority of Americans that it is time for gays and lesbians to settle down.