It’s time to get personal

“The court finds that DOMA, as applied to Ms. Golinski, violates her right to equal protection of the law … without substantial justification or rational basis,” wrote White, who was named to the federal bench a decade ago by President George W. Bush.

The Defense of Marriage Act is probably the second worst law Bill Clinton ever signed, right behind the repeal of Glass-Steagall. 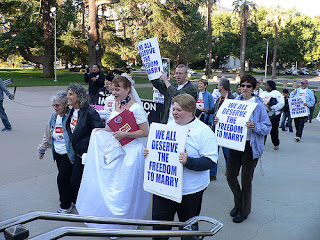 Seniors by and large oppose gay marriage by nearly the same wide margin people under 30 are for it.

Harvey Milk figured out that the path to the acceptance for homosexuals was to be open with friends and family. And that strategy has worked.

A majority of Americans support Marriage for All, as I call it.Yet, seniors oppose it. And they vote.Some have suggested a Lysistrata type strategy—where gays and lesbians refuse to work for people who don’t support equality.

I think a softer sell is in order. Gays and lesbians should, when possible, volunteer in nursing homes, retirement communities. Make a point of making a case to the generation that’s holding history back. Make the case by caring about people who may not even have your best interests in mind, people who have never thought about what it’s like to be denied the right to make a life with the person he or she loves.

Can a micro-level campaign like this defeat an entrenched conservative establishment built on denying rights for others? Maybe not.

But it can personalize the effort. And that’s ultimately how all politics works.