If a Republican had nearly doubled the Dow and gotten bin Laden and Qaddafi, he’d already be on the dime

The good news is: The people who still propagandize against the Stimulus are only doing so because their paycheck or their sanity depends upon it.

The fact is: The Stimulus has had the singularly most impressive positive effect on the American economy of government intervention since World War II. Simply: It worked.

At the time, it was difficult to say how bad the economy was. Was it Iraq bad? Afghanistan bad? Katrina bad? We were constantly testing new lows. Also there was a cautiousness about overestimating the damage for fear that it could spin completely out of control.

People who say the Stimulus could have been larger or better spent forget that it passed by one vote—one vote as the President faced a Republican Party that refused to even offer a plan to save the economy.

Yes. That was what the Stimulus was designed to do: SAVE THE ECONOMY.

It was the winter of 2009. As we were high on electing a sane president, we were also in absolute FREE-FALL. Every month it got worse. Bush/Cheney’s stench of failure had metastasized into actual economic wildfire.

The first big pillar that holds up the GOP’s lies about the Stimulus was the idea that things were going to get better. Fact is: The plunge would have continued indefinitely. How do we know?

Ask Ron Paul. That’s what he thinks should have happened. Paul believes we needed to creatively destruct everything that showed any weakness. As if a financial crisis is a philosophical question to be answered by a wayward architect. As if what would have been creatively destroyed wasn’t jobs, people, families.

Even Ayn Rand took Medicare (so did Rand Paul as a doctor). And everyone knows the US government saved the global unending economic catastrophe by acting to intervene.

As well we should have! The combination of Wall Street’s insatiable greed along with conservative regulations and enforcement of regulation BLEW UP the world’s banks.

The US government—beginning with a Bush/Cheney administration keenly aware they’d simply shit the bed—stepped in to provide capital where no one else would.And that has made all the difference. 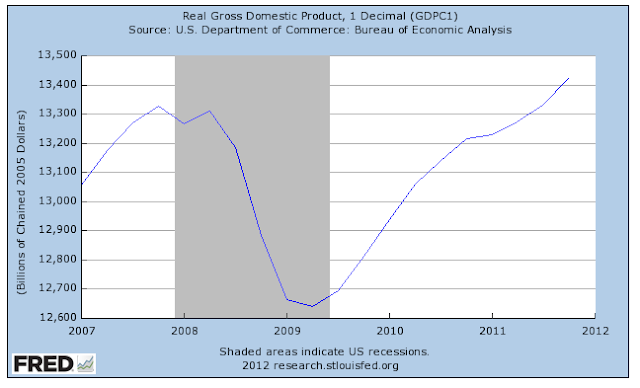 GDP represents the value of everything we produced. It’s a clunky way to look at the economy. Still, GDP now far exceeds the pre-recession peak. If the Stimulus didn’t make this possible, what did? In the spring of 2009, everyone remembered the Bush tax breaks? (Hear that as if Mel Brooks was saying it.) 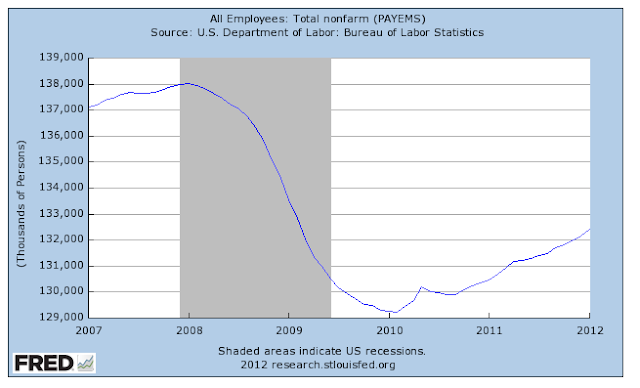 And a BONUS employment chart.

What started to put people back to work in spring of 2009? Had Charles Krauthammer spit enough invective? Was America visited by the ghost of Reagan Past?

Oh, you say it only went up because of the sudden drop in the workforce.

As if millions more wouldn’t be out of the workforces if the layoffs hadn’t stopped.Yes, layoffs. That’s what was (and is on the local and state government levels) destroying America. Layoffs.

In 2009, there were so many layoffs, even Wall Street was concerned. And they LOVE layoffs. 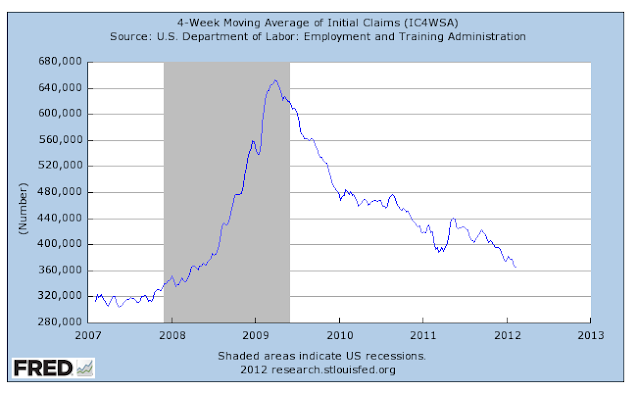 And here is the core of why the Stimulus worked. It stopped the explosion in layoffs.

In January layoffs of 2012 finally cooled to where they were in May of 2008, about a year before Stimulus, when the recession was only the pre-recession.Look at this chart. TELL ME.

What happened in the spring of 2009 to reverse this increase in layoffs?I know.

For too long the media has let the GOP say the Stimulus failed as if they had any credibility about anything other than how to get a guy who admits going to prostitutes reelected.

What has failed in every single way is conservative politics: Austerity, layoffs, pre-emptive war.

The GOP knows failure. And it doesn’t look like 20+ months of private sector job growth.

Anyone who says the Stimulus didn’t work is knowingly telling a lie.And they must be called out.

Don’t believe me? Watch this video which I’m insisting should be remade with Stacy Keibler or Tina Fey as the presenter.