You gotta figure it would take a guy like Tim Walberg (MI-07), who calls himself “The Original Tea Partier”, to say something as patently ridiculous as THIS:

“This downgrade is the result of a history of failure in leadership and fiscal responsibility by the President,” Walberg, R-Tipton, said in a statement.

“We have responded to the people’s call to action and passed significant deficit reduction plans through the House, and we remain willing to make the tough decisions needed to put our fiscal house in order. Let’s use this moment to fix our nation’s fiscal problems. I stand ready to work with those who seek the best America for the next generation.” 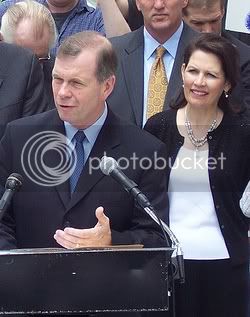 It’s hard for me to believe, even a year and a half after the election, that this clown is my representative in Congress…

You know, it’s easy to say such utter tripe when your biggest fans will swallow it hook, line and sinker. They eat it up because it’s what they want to hear. What they DON’T want to hear is the reality of why Standard & Poors actually downgraded our credit rating:

We lowered our long-term rating on the U.S. because we believe that the prolonged controversy over raising the statutory debt ceiling and the related fiscal policy debate indicate that further near-term progress containing the growth in public spending, especially on entitlements, or on reaching an agreement on raising revenues is less likely than we previously assumed and will remain a contentious and fitful process.

The political brinksmanship of recent months highlights what we see as America’s governance and policymaking becoming less stable, less effective, and less predictable than what we previously believed. The statutory debt ceiling and the threat of default have become political bargaining chips in the debate over fiscal policy.

Let me translate that for you: S&P downgraded the US credit rating because of the intransigence of the farthest right tea partiers in Congress and their willingness to take us into default to support their ideological position that there shall be no increase in revenues. That’s not something to give anyone faith in our ability to solve our problems. If they are willing to put us into default simply to protect the tax protection of the wealthiest individuals (which is only $30 for every $1,000 they make over $250,000) and to protect the subsidies we pay to the most profitable companies in the history of human civilization (i.e., Big Oil), S&P is completely correct in their projection, in my opinion.

This is the Tea Party Downgrade and everybody except the Tea Partiers appear to know this.

Adding…In case there’s any doubt about who owns this downgrade, I refer you to Republican Speaker of the House, John Boehner:

When you look at this final agreement that we came to with the White House, I got 98 percent of what I wanted. I’m pretty happy.