I posted this last year but I thought I’d do it a bit earlier this year in case folks are in the market for some cool Christmas albums.

Enjoy and here’s wishing a very Happy Holiday season to all my friends!

(Clicking on the album covers will take you to web pages where you can listen to clips from the albums.)

Yule B’ Swingin’ – Various Artists
My most favoritest Christmas song of all is off the album “Yule B’ Swingin'”. It’s by Louis Prima and it’s called What Will Santa Claus Say (When He Finds Everybody Swingin’?) While this album is terrific, that one song makes it worth the price of admission, in my opinion. There are some classics here along with some you’ve probably never heard of. Mostly Big Band Swing, it’s my favorite Christmas swing album of the three I own.

Martin Sexton – Camp Holiday
This album is pure acoustic-folk-blues joy. If you’ve never listened to Martin Sexton, you’re in for a treat. He’s got an amazing voice and is a remarkable guitar player. Even better than his albums are his live performances. I highly recommend this album. I assure you you’ve never heard versions of these songs quite like these. I’m particularly fond of his oh-so-bluesey version of Blue Christmas. Although the album is pretty much all just him and a guitar, the version of Silent Night features his father and sister and, while his dad’s singing isn’t completely professional quality, the homesy feel will make you smile. You can listen to NPR’s review of this album HERE.

This Warm December, A Brushfire Holiday Vol. 1 – Various Artists
I’m a big fan of Jack Johnson and he has put out a Christmas album featuring artists from his record label, Brushfire Records. It’s a lovely, eclectic mixture of folk/indie rock tunes featuring Johnson himself, Mason Jennings, Matt Costa, Zee Avi, G. Love, Money Mark, Neil Halstead and Rogue Wave. Johnson’s version of Rudolf The Red Nosed Reindeer is one you may have heard on the radio. Additionally there are two previously-unreleased songs by him along with some original songs from the other artists. Brushfire Records donates 25% of the profits from this album to the support of children’s music education.

California Guitar Trio – A Christmas Album
The California Guitar Trio is composed of three graduates from guitar legend Robert Fripp’s Guitar Craft instructional program. What these three guys do with their custom-made guitars is nothing short of phenomenal. I’ve enjoyed them live twice (including with bass play Tony Levin) and they never cease to amaze me. This all-acoustic album is complicated yet simple at the same time. It’s great background music to any holiday gathering yet, if you listen closely, you’ll discover layers and complexity that isn’t immediately obvious. I was thrilled to find out they had done a Christmas album and I wasn’t disappointed. Also, if you ever get a chance to see them live… DO IT!!!

Putumayo Presents: Christmas around the World – Various Artists
Putumayo Music has a number of albums out featuring World Music and artists from across the globe including a variety of Christmas albums. This album has music from Cuba, Barbados, Puerto Rico, USA, France, Martinique and Haiti. Some new, some classics, all are a joy and a nice departure from the average, run-of-the-mill Christmas songs.

Christmas Guitars – Various Artists
This is one of two all-guitar Christmas albums I’m reviewing. I particularly like this one because it features several of my favorite guitarists ever: Adrian Belew (whose guitar sounds variously like a piano, an organ and horns on We Three Kings), Michelle Shocked, and Taj Mahal. There’s a little something for everyone here and it’s mostly on the low-key side.

Merry Axemas: A Guitar Christmas – Various Artists
Unlike the previous guitar album, this one has some wallpaper-shredding, chainsaw electric guitar action. Jeff Beck. Joe Satriani. Steve Vai. Joe Perry. Alex Lifeson. This is real rock-and-roll Christmas music and, while not the most peaceful Christmas album in my collection (okay, it’s the least peaceful one!), it never fails to bring a smile to my face when one of these songs comes up on the mix. 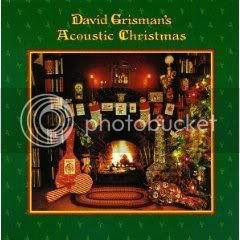 David Grisman’s Acoustic Christmas – David Grisman
At the end of the day, it’s folk music that I enjoy most when it comes to Christmas tunage and I own a number of folk music Christmas albums. However, this one by David Grisman is my favorite. As a totally lame mandolin player, listening to David Grisman is both inspiring and demoralizing. This album is full of classics along with a handful of not-so-classics. If you’re going to purchase any David Grisman albums, this one and his collaboration with Jerry Garcia from the Grateful Dead Grisman & Garcia are the ones to buy.

Well, that’s it. I have many more albums but these are some most people aren’t familiar with and ones I think you’ll adore as much as I do.

Once again, to all my friends, have a great holiday no matter how or what you celebrate. Stay safe and have fun.

If you enjoy what you’re reading here, please consider sharing it on your Facebook page or submitting it to Reddit or other sites using the links provided under the “Share button” below. Thank you!