Oops. Someone rolled out an internet banner ad a day early, it appears: 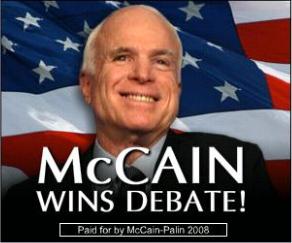 Screen shot of the webpage from the Wall Street Journal featuring the ad HERE.

“McCain Wins Debate!” declares the ad which features a headshot of a smiling McCain with an American flag background. Another ad spotted by our eagle-eyed observer featured a quote from McCain campaign manager Rick Davis declaring: “McCain won the debate– hands down.”

UPDATE: Turns out he IS going to show up tonight. This despite his pledge not to unless an agreement was worked out. No agreement yet exists. What a clown show…