I didn’t particularly find this bit of satire all that fucking funny, frankly. 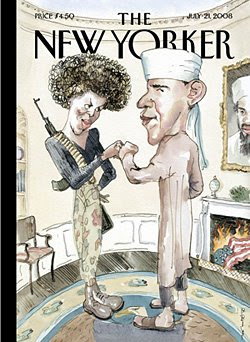 It could have been good satire if there weren’t so many Goddam st00pid peoples out there who actually believe most of the crap being made fun of in that cartoon. Those people totally will not get the joke, you can be sure. And the cartoon misses one thing: any reference at all to the people that it’s poking fun at.

But THIS, now THAT is some funny shit. Go read it. It’s funny as fuck.

I love the way he brings out the fact that if you posted a satirical cartoon of McCain getting tortured, well, Jeezo, that’s just not funny. The same would go for portraying his memory lapses, his lack of knowledge about things he sure as shit ought to know about or anything else that suggests he’s just too old a geezer to run the most powerful country on the planet.

But it’s okay to depict every single smear every leveled against a Democrat.