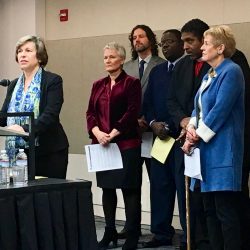 END_OF_DOCUMENT_TOKEN_TO_BE_REPLACED

Back in March I wrote about white nationalist Kyle Bristow’s support of Attorney General Bill Schuette’s effort to maintain Michigan’s bigoted ban on same-sex marriage. Bristow filed an amicus brief in support of Schuette’s appeal of a federal court ruling declaring the ban unconstitutional on behalf of an extremist group called the “Traditionalist Youth Network LLC”. At I wrote at […]

END_OF_DOCUMENT_TOKEN_TO_BE_REPLACED What do Michigan AG Bill Schuette and white nationalist Kyle Bristow have in common? Anti-gay bigotry.

We shall know you by the company that you keep As Michigan Attorney General and 2018 gubernatorial candidate Bill Schuette continues his crusade to deny gay and lesbian couples their civil rights and equality under state law, he finds himself with interesting company. It turns out the white nationalist Kyle Bristow has filed an amicus brief (pdf) in support of […]