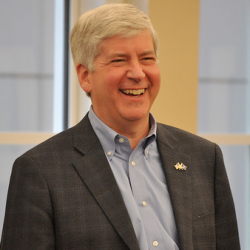 Yesterday afternoon while most of us were driving home from work or home getting ready for dinner, Gov. Rick Snyder signed Senate Bill 571 into law. It’s now Public Act 269 of 2015. This legislation started out innocuously enough as a 12-page campaign finance reform bill that involved how funds are collected and distributed by organizations that manage “separate segregated […]

END_OF_DOCUMENT_TOKEN_TO_BE_REPLACED Folks are waking up…

For the first time since April, the Obama campaign raised more money than Mitt Romney‘s campaign:

President Obama and Democrats pulled slightly ahead of Mitt Romney and Republicans in monthly fundraising in August for the first time in four months.

Obama raised more than $114 million in August, and Romney brought in just over $111 million. The two campaigns announced their fundraising numbers early Monday.

It’s a sharp increase for Obama, who raised $75 million in July. That had been the third straight month he and the Democratic Party trailed Romney and the GOP in monthly fundraising.

END_OF_DOCUMENT_TOKEN_TO_BE_REPLACED

This week, the Alabama and New Hampshire Democratic parties filed a complaint (pdf) against the Romney campaign, claiming that he is using lax rules in various states to raise money and then funnel them back to his national campaign. To make a long story short, Romney’s campaign is using these state PACs to accept contributions in excess of the federal […]