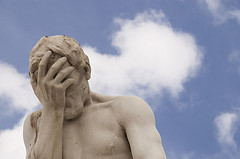 In late March, the North Carolina legislature convened a one-day special session where they steamrolled through legislation making it illegal to use a public restroom not corresponding to your gender at birth. It was quickly signed into law later that night and the state has faced an unprecedented firestorm ever since. The NBA is talking about moving the 2017 All-Star […]

END_OF_DOCUMENT_TOKEN_TO_BE_REPLACED

Maybe someone read them the U.S. Constitution?

North Carolina House Speaker Thom Tillis, a Republican, has ended any chance that a recent resolution that would pave the way to establishing an official state religion will see the light of day. Tillis said yesterday that he will not allow a vote on the resolution known as the “Defense of Religion Act”.

The bill was a response to an ACLU lawsuit regarding the reading of Christian prayers at official government functions.

END_OF_DOCUMENT_TOKEN_TO_BE_REPLACED

North Carolina GOP wants to create state religion, says federal courts have no power to determine constitutionality of anything

This is absolutely incredible. Republicans in North Carolina have introduced legislation that will allow them to set up their own state religion and ignore all federal laws.

If you think I’m joking, read on.