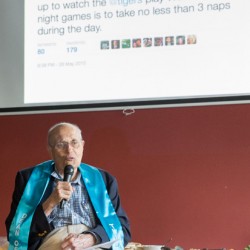 Last night’s 2nd Annual Eclectafundraiser is in the can and, in my opinion, it simply could not have gone better. We had well over 100 folks come by, the beer lasted until the very end, and we didn’t run out of Eclectagrog beer glasses to give away. Oh, yeah. This happened, too: Yes, history was made when, after being crowned […]

END_OF_DOCUMENT_TOKEN_TO_BE_REPLACED