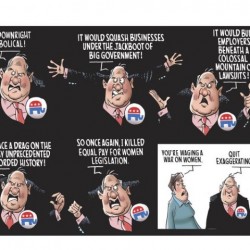 Who are the real soldiers on the war on women?

The Obama Presidency has been fraught with examples of how society in the United States is not ready for prime time. The Obama Presidency began with him signing the Lilly Ledbetter Fair Pay Restoration Act . This sent a clarion call to the country that he was serious about equality on many fronts. Since that day he has been effective […]

END_OF_DOCUMENT_TOKEN_TO_BE_REPLACED

Lilly Ledbetter on the GOP War on Women: “Romney should understand this…is about families and economic security”

A veteran in the War on Women sets Mitt Romney straight

I was on a conference call today with DNC Chair Debbie Wasserman-Schultz and Lilly Ledbetter, the namesake of the now-famous Lilly Ledbetter Fair Pay Act. The two women were speaking to reporters about the War on Women as Mitt Romney tours Pennsylvania and Virginia in this first week of the general election.

Ms. Ledbetter, a woman who has been through some of the major battles in the War on Women, has a few things she’d like to say to Mitt Romney.

END_OF_DOCUMENT_TOKEN_TO_BE_REPLACED Sam, we’ll get back to you on that Yesterday, when asked if Mitt Romney supports equal pay for men and women doing the same job, his campaign team didn’t have an answer. They had to check to see if he actually support women’s rights or not. The shocking thing about this is not that they weren’t sure. It’s probably hard […]