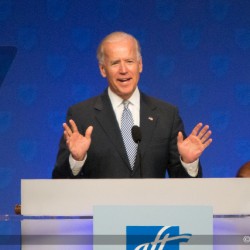 Jill Biden inadvertently references Joe’s penis, cracks up self and everyone else

Yesterday, at a campaign stop in New Hampshire with her husband Vice President Joe Biden, the crowd reacted to one of Jill Biden’s comments as if she was referencing her husband’s junk. The unintentional double entendre cracked up Joe, the crowd, and Jill Biden herself. The crowd started cheering and whistling and catcalling and Jill turned around repeatedly to look at her husband who was also cracking up.

Video and more childish humor after the jump.

END_OF_DOCUMENT_TOKEN_TO_BE_REPLACED One of the highlights of the week was the keynote speech by AFT president Randi Weingarten who unveiled a new approach for AFT she dubbed “solution-driven unionism”. During her speech, Weingarten talked about the “new normal” facing Americans today in face of severe budget cuts jeopardizing public education, healthcare and other critical services; families losing more than 30 percent of their wealth during the economic crisis; and more than 100 bills introduced in state legislatures to demonize and attack public employees and undermine public services

Much more with lots of photos and quotes after the jump.

END_OF_DOCUMENT_TOKEN_TO_BE_REPLACED

After receiving a standing ovation from drivers during a pre-race drivers meeting on Sunday, First Lady Michelle Obama and Dr. Jill Biden, wife of Vice President Joe Biden were unceremoniously booed at NASCAR’s final race of the year at Homestead-Miami Speedway. The two women were there honor military men and women and their families and to draw further attention to […]

END_OF_DOCUMENT_TOKEN_TO_BE_REPLACED

Here’s some big news I bet you didn’t hear much about this week. On Wednesday, First Lady Michelle Obama and Dr. Jill Biden, wife of Vice President Joe Biden, announced a commitment by the American Logistics Association (ALA) and their 270 affiliate companies to hire 25,000 veterans and military spouses by the end of 2013. THE WHITE HOUSEOffice of the […]