The organization is making great strides in its mission to create a food sovereign Detroit, while harvesting community spirit and new income sources for Detroiters. As we prepare for Thanksgiving, it’s a great time to check back with Keep Growing Detroit, an urban gardening organization I first reported on back in May. Keep Growing Detroit was established this year as […]

END_OF_DOCUMENT_TOKEN_TO_BE_REPLACED 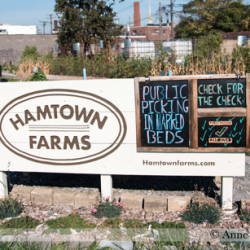 END_OF_DOCUMENT_TOKEN_TO_BE_REPLACED

Another one bites the dust Yesterday, Michigan Governor Rick Snyder declared a financial emergency in Hamtramck, Michigan. As I’ve written about before, this will be Round Two for the culturally-diverse city. They had an Emergency Financial Manager, Lou Schimmel, back in 2000 when John Engler was governor. Hamtramck (spelled correctly, pronounced “Ham-TRAM-ick”), is rare in that the city actually asked […]

END_OF_DOCUMENT_TOKEN_TO_BE_REPLACED

Another failure of Emergency Management

The southeastern city of Hamtramck (spelled correctly, pronounced “Ham-tram-ick”) is facing the prospect of its city being taken over by an Emergency Manager as the state has ordered a financial review team to assess its financial situation.

This would be Round Two for Hamtramck. In 2000, Governor John Engler installed an Emergency Financial Manager, a familiar player Louis Schimmel. Six years later, books balanced and financial crisis “solved”, Schimmel left and, in 2007, the city was once again back in charge of its government.

However, that didn’t last long. In 2010, facing continuing budget issues, Hamtramck asked the state to be allowed to declare bankruptcy. They were denied.